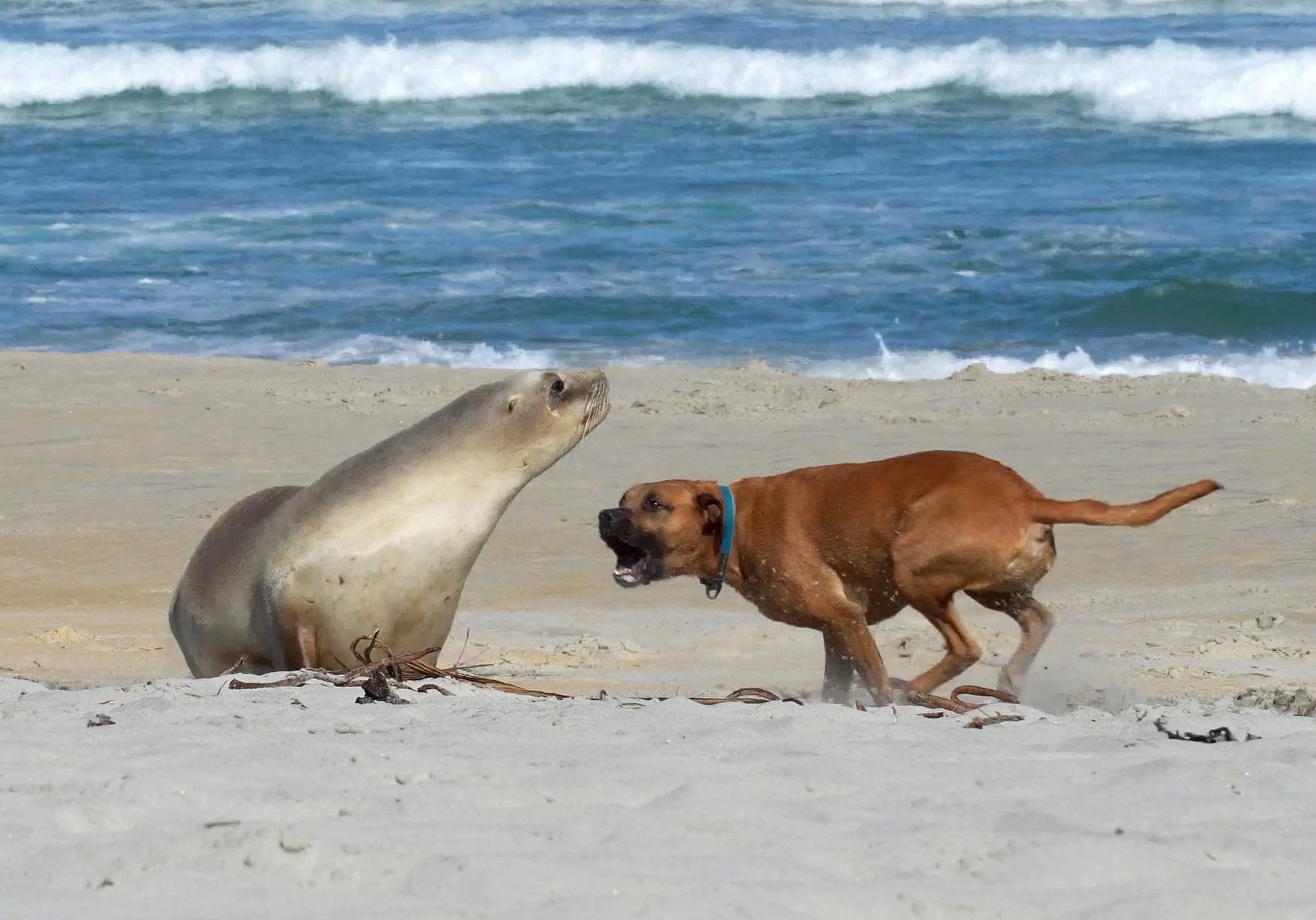 A dog off its leash disturbs a sea lion resting on Smaills Beach, in Dunedin, last week. PHOTO: EVGENY RODYGIN
A photo of a dog attacking a threatened New Zealand sea lion on a Dunedin beach has angered the Department of Conservation.

Evgeny Rodygin was on Smaills Beach last week when he saw the dog approach and begin barking at a resting sea lion.

He took a photo and posted it online to remind people to put their dogs on a leash.

"I think that everyone should respect that the beach is wildlife territory and follow common-sense rules," Mr Rodygin said.

Department of Conservation (Doc) marine and coastal species liaison officer Chris Page said it was upsetting to see, especially as it was preventable.

Dog interactions were stressful for sea lions and Doc had seen dog attacks in the past that caused "gruesome" injuries and even killed marine mammals.

"We are lucky to have so many marine mammals, penguins and shorebirds frequenting our coastline — we need to be better at sharing the space," he said.

It was in everyone’s best interest to ensure beaches were shared and dogs were kept under control, as they could also get injured or contract illness from wildlife.

Mr Page said dog owners should always carry a lead and scan the beach thoroughly before releasing their pet.

People should also stay at least 10m away from sleeping sea lions and 20m away while they were awake.

New Zealand Sea Lion Trust education adviser Hanna Ravn said harassment of wildlife was an illegal act, so it could be reported and prosecuted.

"We try the best that we can to educate in a positive way, but sometimes we do wish that there could be more back-ups from the legal side."

It was important to always be considerate towards sea lions.

"The female sea lions are travelling sometimes hundreds of kilometres a day to go and fish and then come back to the shore."

If the sea lions did not feel safe to come ashore to where their pups were that could have some "big consequences", she said.

At times, the mothers were also gone for days at a time so when they finally returned it was important to feed the pups quickly.

Ms Ravn said people could also help keep sea lions safe by letting the trust know when they saw a sea lion by reporting its tag number, but only if they had a camera with a good zoom or binoculars to read the tag without getting close.

Totally agree ...far too many dogs in Dunedin's suburbs.

I like dogs, but some are rogues and need to be dealt with accordingly, along with their owners...

Mostly the owners, who create the problem behaviour because they don't provide boundaries or training to give the dog expectations of how to behave! With persistent, consistent training, dogs are amazing companions.
Hopefully the Council's dog control is informed of the owner's name ... so the owner gets a sizeable $$$ fine that causes them pain and makes them decide they'll never let it happen again and motivates them to train their dog better. Or community service if they can't pay a fine.

"he saw the dog approach and begin barking at a resting sea lion".

They say a picture paints a thousand words and never judge a book by its cover...

I can see a sea lion, but it certainly isn't resting; and I can see a dog barking, or possibly even laughing, because a bloody great sea lion has just reared up out of nowhere and started "attacking" it while it’s impersonating a freedom camper by taking a dump on the beach ... the dog is merely defending itself against an adversary that probably weighs 25 times more than it does, or laughing at the streaks of dark dye running down the side of the overweight beach bullies face.

And there are probably hundreds of readers believing this photo shopped "fake news" but I shall remain steadfast and never concede that it was the dog did anything wrong … I believe the dog will win the defamation case against both DoC and the photographer.

I would certainly like to know what happened after the photo was taken, because this photo doesn't prove there was any "attack". Most animals are naturally curious and for all we know the dog did get a fright and barked once and ran back to its owner ...
don't just jump to conclusions.

Very funny (not). Good rest at the beach is critical for the sea lion survival. Even if dog didn't make any injuries, the distress can be big enough for the sea lion to not have enough energy to catch food or divert from a shark when next time in the ocean, they can't simply drink some latte and move on after a bad sleep.

There is nothing honest or reasonable in your comment.

Agreed. Point taken. After writing my comment above I went away and thought ... "Actually the photo didn't show any attack. Just a barking dog that was also showing fear". Is there any photo of an attack, or just barking? I know with my own young dog, we have a few times stumbled upon sea lions. The dog and I got a heck of a fright to realise too late we were up close, as well as the sea lion. The first time my young dog probably barked and ran in circles for 5- 10 seconds. The look on his barking face was one of fear, and akin to the photograph above. He never touched the sea lion, and then after approx 5 seconds, I was able to call him off his running around in circles barking. He was barking from fear. The second time we stumbled over a little sea lion, and he only barked 2 barks and kept going the direction he was on without moving towards or impinging any further on its space. So a big improvement. No one was hurt on either occassion, no dog touched a sea lion. It was very brief barking, but would have looked not great snapped in a photo. My previous dogs were so steady they wouldn't think to go near a sea lion to investigate. If they stumbled upon one, they'd run!

The dog is clearly not under the control of the owner, it looks to be behaving aggressively towards a creature it has no right to be so close to. The owner is clearly in the wrong. Dogs will be dogs, we owners are responsible for keeping them under control.

Easy solution, keep your dogs at home, it will save watching where you walk as well