It had so far removed the risk of 813 poles during its fast-track pole programme and through normal renewal and maintenance.

Of those, 650 had been replaced, with the rest either repaired, reinforced or reassessed using an independently verified testing method.

An Aurora spokesman said it had abandoned its original plan to replace all 1181 condition-zero poles, which are the worst-rated poles on its network, by the end of this month.

''Our target is to remove the risk around 2910 priority poles by the end of the year and we are on track to achieve that.

''That's the target we are working towards. The April target was an initial working target before detailed programme planning had been completed.''

After being given more than two weeks to respond, the spokesman did not say how many new condition-one and zero poles had been discovered during its fast-track programme, saying: ''We don't have these figures to hand today''.

Aurora chairman Steve Thompson said in a statement its fast-track programme was going to plan.

''We now have 21 crews working on the programme, as well as some civil contractors.

''All in, we currently have more than 120 people dedicated to the pole programme across the network in Dunedin, Central Otago and Queenstown Lakes,'' he said.

The initial focus had been on poles in high-priority areas near schools, kindergartens and high pedestrian areas.

''In Dunedin, we continue to remove the risk of condition-zero poles in the central business district and other populous areas,'' Mr Thompson said.

Safety remained its top priority and for the programme it had used a detailed process and methodology agreed with WorkSafe NZ, including turning power off when external contractors worked on its equipment.

''A programme of this scale involves an unavoidable increase in the number of planned power outages. We appreciate this can be inconvenient and we thank people for their patience as we carry out this important maintenance and asset renewal work.''

Aurora had stepped up customer service support and communication so its customers were informed when power needed to be cut.

''On occasion, we may be unable to proceed with work on the day the planned power outage is scheduled.''

He encouraged customers to check the Aurora website on outage days for cancellations. 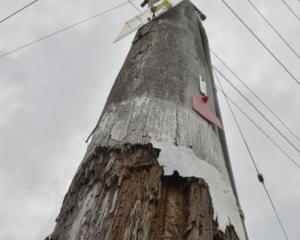 What's the independently verified testing method, a quick eyeball scan up and down said offending pole and a she'll be right tick on an official looking piece of paper.