The man who was to head the accelerated power pole replacement programme for under-fire Dunedin infrastructure company Delta has resigned.

The resignation has been described as a blow to the programme.

It was one of two resignations this week.  Delta asset management general manager Derek Todd left  for medical reasons.

The Otago Daily Times understands that Jarrod Stewart, who had been with the company for eight months, quit his role in the past few days.

Mr Stewart said he could not comment yesterday, but the resignation was confirmed by whistle-blower Richard Healey.

Delta marketing and communications manager Gary Johnson said the company did not comment on individual staff "beyond saying the ODT has previously reported, and we’ve said, we’ve got an organisational change process in place, and there will be position changes".

Asked if that meant Mr Stewart had lost his job in the restructuring, Mr Johnson said he could not comment.

But Mr Healey said the restructuring was not why Mr Stewart left, and the Otago Daily Times confirmed with another source he had resigned.

Over the past few weeks, it has been revealed the Dunedin City Council-owned company and lines company Aurora have not maintained electricity infrastructure, leaving thousands of power poles compromised and potentially dangerous.

Staff this week called on the company’s management to come clean on safety issues, and keep the public informed about the dangers they faced.

Aurora a month ago approved a $30.25 million programme to replace close to 3000 compromised poles.

Mr Stewart was Delta’s regional manager of Central Otago and Dunedin, but his role was disestablished about a month ago, Mr Healey said.

In a November 8 message to staff, Delta chief executive Grady Cameron said Mr Stewart would be "stepping into the role of programme director for the pole replacement project reporting to me with effect  immediately".

Asked about Delta’s suggestion the restructuring was behind Mr Stewart leaving, Mr Healey said "no".

"This is a major blow for them, because they were hanging on having him lead the pole replacement programme."

He said that left the programme in disarray.

"He was the programme.

"He had done all the ground work for the establishment of the programme.

"The real story is why did he feel he had to walk away from it?"

Mr Todd said he had a spinal fusion operation on his lower back in late September.

He was still not able to work a full day.

He may need other surgery, and rehabilitation had not been going well.

"That was the reason.

An email from Mr Cameron to Delta staff on Wednesday said Mr Todd would undertake a specialist support position on a limited hours basis until the end of March next year, at which time he would leave Delta. 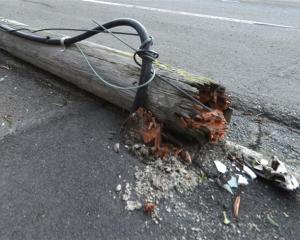