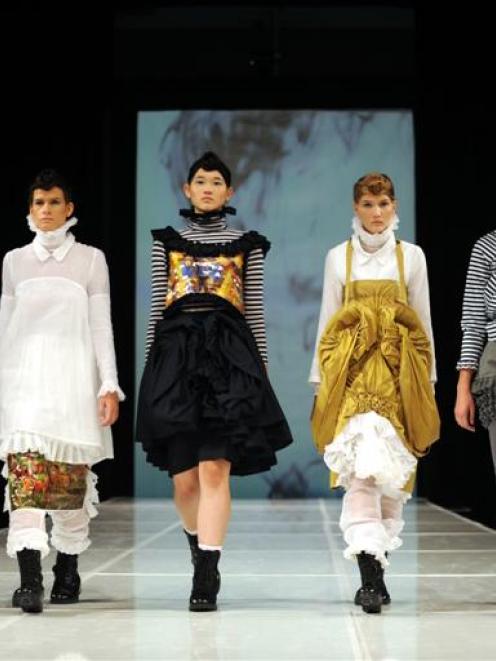 Four of the top prizes from last night's show, attended by about 1300 people, went to designers from over the ditch, with the remaining two going to those from further afield.

Twenty-eight emerging designers took part in the awards, with Carolina Barua, from the Royal Melbourne Institute of Technology, winning the Peroni first prize of $5000 for her collection "S'swell".

The 25-year-old, born in Peru, said the collection began as a "historiographical study into the documentation of socio-political events, the collection emerged from research into representative fashions and their semantic qualities".

Images were gathered into an archive which she used as "reference points to which processes of distortion were applied, such as elongations, restriction, spin and transfiguration".

She felt "very honoured that the judges have time for these kind of events - it's really important to support up-and-coming designers".

It had "an intriguing blend of hand techniques and new technology", she said.

Patricia Kapeleris, of the University of Technology, Sydney, won the Caffe L'affare second prize of $3000 for her collection "Urban Blight".

Mr Huxley, however, said a focus on "intelligent design" at times neglected the "whole package".

"Designers need to think about proportion and fit and making the most of their fabrics," he said.