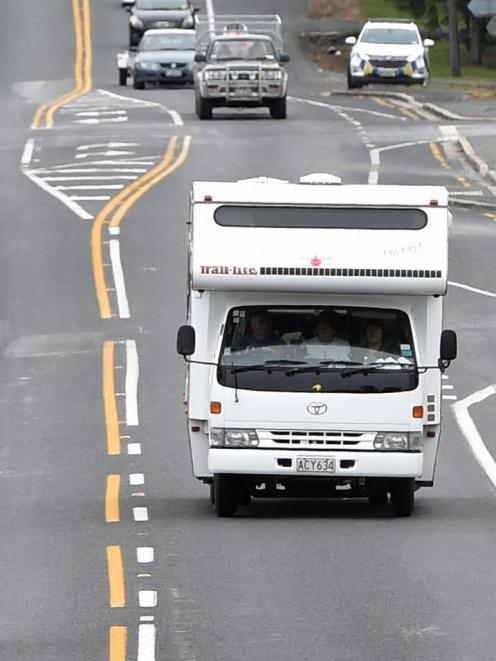 Traffic streams through Waihola towards Dunedin past a police patrol at the end of the official holiday period on New Zealand roads on Tuesday. Police have expressed disappointment with drivers’ behaviour after 17 people were killed on the roads over the holidays. PHOTO: PETER MCINTOSH
Southern police have criticised behaviour on the roads during a deadly holiday period, saying poor driving was "everywhere they looked".

Senior Sergeant Anthony Bond, of Dunedin, in particular hit out at the myriad "poor excuses" from speeding drivers, which included sneezing and running late for a belly-button piercing appointment.

It comes as New Zealand’s official holiday road toll period, which started on Christmas Eve, ended yesterday morning with a total of 17 deaths.

Those included 40-year-old Dunedin man Brent Cleghorn, who died after his car and a truck collided on State Highway1, at Waihola, on Christmas Day.

Snr Sgt Bond said it was disappointing how many motorists had continued to speed even as police increased their presence over the final two days of the holiday period.

"Feedback from police staff was that everywhere they looked, if motorists weren’t speeding, then they weren’t wearing their seatbelt, or [were] distracted by their cellphone," he said.

The highest speeds observed were 81kmh in a 50kmh zone, and 132kmh on Dunedin’s Northern Motorway, he said.

The majority of motorists ticketed were Dunedin residents returning from holidays, or travelling locally.

Among the frustrations for police was stopping a 47-year-old man for speeding and finding all five children (aged 5 to 15 years) in the vehicle were unrestrained.

A woman stopped in Mosgiel told police she was running late to get her belly button re-pierced as her other ring had fallen out, Snr Sgt Bond said.

Another woman driver, who was stopped in Maheno after she was caught driving at 87kmh in a 70kmh zone, said she sneezed and put her foot on the accelerator.

A 59-year-old man caught travelling at 132kmh on the Northern Motorway on Monday was breath-tested after admitting to drinking spirits at lunchtime.

He recorded a breath-alcohol level of 493mcg, but elected a blood sample. Police were awaiting that result.

Police targeted drivers on the Southern Motorway on Monday and handed out 13 speeding tickets in an hour, he said.

Nationally, one of five children injured in a road crash in Matamata last month has died.

Police said in a statement the 13-year-old girl died in Waikato Hospital yesterday.

Assistant Commissioner Bruce O’Brien said many of the deaths on the country’s roads over the holidays were avoidable.

This year’s 17 deaths compared with 11 deaths last year and was the highest holiday period road toll since 2016-17. Driving safely or within speed limits should not be at the discretion of the driver on public roads? Many studies on human behaviour point at the inability of people at determining their own skill sets and abilities. People have a great ability to observe other peoples poor performance, but not their own (blind-spot bias). Most modern cars in NZ seem to be engineered to permit them to go over speed limits and, weirdly enough, to be able to drive with unrestrained passengers/drivers when simple engineering solutions can exist to prevent this. Although implausible, sneezing at the wrong time, or even right foot cramp can result in significant (“collateral”) damage. Does anyone else think it is time we pushed back at car manufacturers to push through better engineered safety solutions through limiting access to public roads for vehicles without these regulated solutions? My responses from NZTA regarding this have been rather muted. Without these changes in focus all of us drive and possibly survive at the whim of our human behaviours.