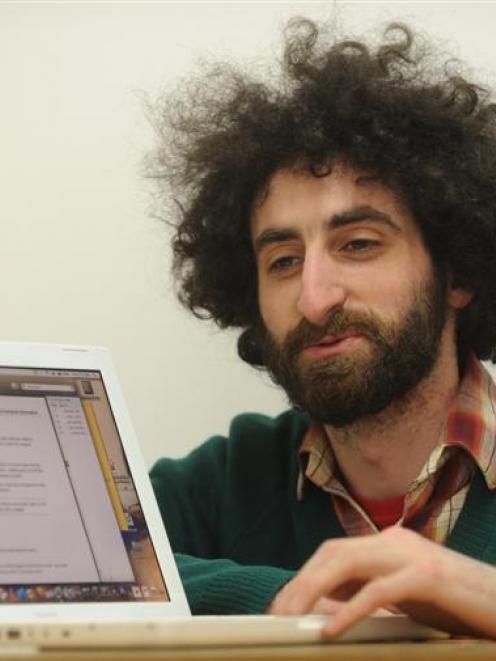 Chris Keogh shows his Facebook page. Photo by Peter McIntosh.
A new online group which says the Dunedin City Council has "lost the plot" has become an instant hit on the social networking site Facebook.

The group was launched by Dunedin musician Chris Keogh on July 17, but days later its membership had increased to more than 1600 people.

Most members were from Dunedin, but others were former residents logging in from around New Zealand, Australia, the United Kingdom and - in one case - while travelling through Greece.

The group's page featured a lively, and occasionally ludicrous, exchange of more than 130 messages, debating the merits of council rates, city parking and, of course, the Forsyth Barr Stadium.

Mr Keogh (26) yesterday said, when contacted, he started the group "more or less out of frustration" at recent council decisions, including changes to city parking, and had been staggered by its popularity.

"It's a little bit shocking - I didn't expect it. I thought there would be a couple of hundred people. It's grown so fast and it hasn't even been up a week."

Despite the group's name, Mr Keogh said he was not targeting individual councillors, had deleted some offensive messages and was "not anti-stadium either".

He believed some - but not all - councillors deserved to be voted out, but said the main point of the Facebook group was to promote greater political dialogue and participation in next year's local body elections.

He planned to add electoral information such as how, where and when to vote, closer to the poll.

Mr Keogh's work was not the first dedicated response to council decision-making to appear on the internet.

Stop the Stadium launched a website as part of its campaign to halt the Forsyth Barr Stadium, and the What if? Stadium of Dunedin site also contributed to lively debate.

Mr Keogh has also recorded a protest song describing his views on the council, a video of which has been posted on YouTube.

Many messages on the Facebook group page were serious, and occasionally heated.

Mr Keogh stressed he preferred "civil and constructive debate", and believed most of the group's messages were acceptable.

He also said he had no plans to use the group as a platform for next year's election.