Pedestrians cross at the Princes St-Dowling St Barnes Dance in the late 1960s. Queens Gardens is in the background. Photo: ODT
Dunedin is stepping back in time with a $1 million plan to bring back Barnes Dance pedestrian crossings.

The Dunedin City Council yesterday announced eight central city intersections would be converted to Barnes Dance crossings over the next five months, and more could follow if the changes proved successful. 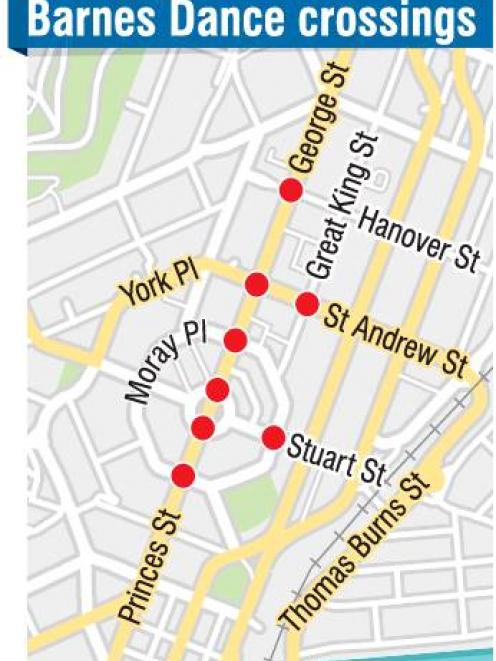 Barnes Dance crossings allow pedestrians  to cross the road in all directions at once, including diagonally across intersections. Council transport group manager Richard Saunders said the intersection of Princes St and the Octagon would be the first switched over, on March 19, followed by George St and the Octagon the following day.

Those two intersections had already been upgraded, with the new lights and cables, making the switch-over easier. The following six intersections would take longer, but he expected they would be completed by July, Mr Saunders said.

The change aimed to improve the city’s "less than enviable" pedestrian safety record at a time when the city centre was  getting busier.

The change would also benefit motorists by making intersections simpler for turning traffic.

"It is a busier city centre now, and that’s both vehicles and pedestrians."In order to have those two different groups interacting safely, we have to look at new ways of doing things."

Barnes Dance crossings — named for United States traffic engineer Henry  Barnes — were used in Auckland, but yesterday’s announcement represented a step back in time for Dunedin, which farewelled the last of the once-popular crossings in the 1980s.

Mr Saunders said the reintroduction of  crossings was already being considered as part of central city safety improvements.

However, the council also needed to renew its existing central city traffic lights, which were due for replacement anyway, and preparations for the new central city bus hub gave the council an opportunity to get started sooner, he said.

The new crossings would cost $135,000 for each intersection, but the total cost of $1.08million for the first eight to be changed would attract a 57% subsidy from the NZ  Transport Agency, he said.

The council’s share would come from existing safety improvement and asset renewal budgets, he said.

The  crossings would also have new countdown timers, showing pedestrians how long they had to cross, he said.

Changes to intersections in other parts of the city, including in South Dunedin, near Forsyth Barr Stadium and in the student quarter, could be considered later, he said.

AA Otago District Council chairman Alan Race said the association backed the changes, which would address "safety and uncertainties" for pedestrians and drivers.

About time the Barnes dance was a great idea.

They should paint the traffic lights with black and white stripes again, they stand out.