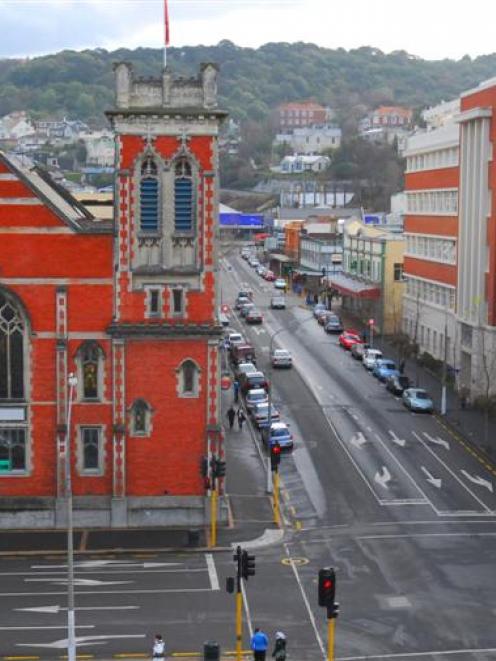 The Monkey Bar, at the corner of Gt King and Hanover Sts in Dunedin. Photo by Gregor Richardson.
"Stressed out" guests at Oamaru House, in central Dunedin, have had enough of being kept awake by rowdy patrons at a nearby bar and are objecting to the venue's 24-hour licence.

Oamaru House, on the third floor of a building near the corner of Gt King and Hanover Sts, provides accommodation for the friends and families of people who are in hospital.

It was set up 12 years ago by Oamaru Altruso.

Manager Onna Hood, who lives on site, said The Monkey Bar opposite Oamaru House was open until 6am on Fridays, Saturdays and Sundays and people staying there had to deal with swearing, yelling, smashing bottles and thumping bass from the nightclub.

The group may spend $40,000 double-glazing the windows in the nine rooms, but had no guarantees it would stop the noise, Ms Hood said.

"It is just unbelievably loud until 6am. We want to sleep all night and they want to party all night."

Ms Hood said several guests had written to the Dunedin City Council asking for a change to the 24-hour liquor licence and she had made dozens of calls to noise control.

Many guests had bought earplugs.

It had been a problem for at least a year and a-half.

Council liquor licensing inspector Tony Mole said The Monkey Bar had been running on a temporary licence since February last year; the licence had to be renewed every three months.

When the bar owners applied for a renewal of their 24-hour licence, Oamaru House objected.

The bar owners will appear at a Liquor Licensing Authority hearing in September.

Mr Mole expects a representative from Oamaru House and the police will speak at the hearing.

"I"ll be extremely surprised if they come out of that hearing with a 24-hour licence," he said.

The owner of The Monkey Bar could not be contacted.