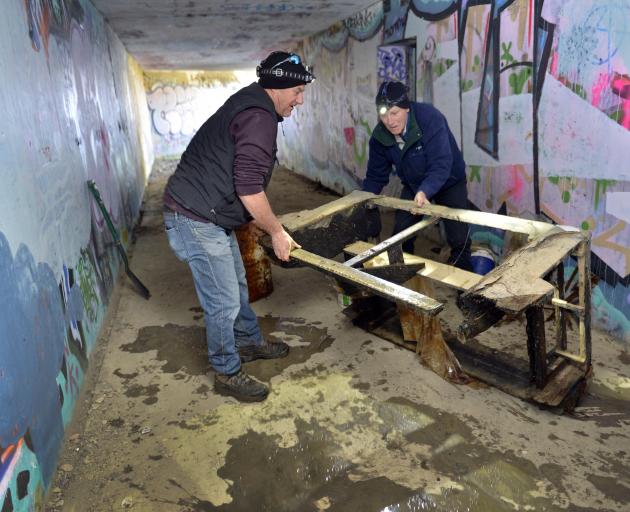 Otago Peninsula Community Board chairman Paul Pope (left) and board member Graham McArthur clean out some of the rubbish at the Harington Point gun emplacements. PHOTOS: GERARD O'BRIEN
Old furniture, countless spray paint cans, a 44-gallon drum and some unidentified objects were all hauled from the Harington Point Battery site on Saturday.

The clean-up was the first step towards the restoration of the gun emplacements and tunnel area, and the creation of greater public access to the site.

Otago Peninsula Community Board chairman Paul Pope said it was part of a long-term project aimed at gradually recovering the many interesting and historical military features of the battery.

"It was one of the last Russian scare batteries constructed in Dunedin due to the threat of a Russian invasion." 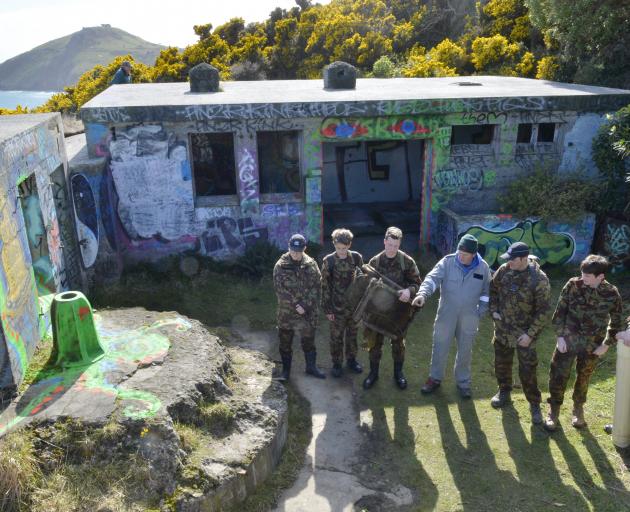 Making a plan of attack for the clean-up are (from left) Air Training Corps No 42 (City of Dunedin) Squadron cadets Liam Knotts, Blake Mackie and Riley Mortimer, Southern Heritage Trust military historian Peter Trevathan, corps commanding officer Ben Flottman and cadets Dylan Mackie and William Faulkner.
Construction started in 1890 but was not finished until 1906. It contains an extensive tunnel system with an ammunition bunker, living quarters and an engine room to provide power.

"It was also used during World War 2 but was abandoned before the war was over."

Mr Pope said the site had since fallen into disrepair.

"It's had a bit of a hard time. It's nice to get it tidied up and get some of the rubbish out.

"This is a good time to remind people that this is an historical site, and it's important that they give it the level of respect it is due.

"If people come here, great. But they need to take their rubbish with them."

About 20 people, including cadet forces from the Air Training Corps No 42 (City of Dunedin) Squadron and the Otago Peninsula Community Board were at the site on Saturday picking up rubbish.

Mr Pope said a working group - consisting of the Dunedin City Council, Heritage New Zealand, the Otago Peninsula Community Board and Southern Heritage Trust representatives - was set up last year to work with iwi on a long-term management plan for the historic site, which is on private land.

The ultimate goal was to provide information about the site, and help visitors understand the heritage of the battery, from its Maori origins through to its European military development.