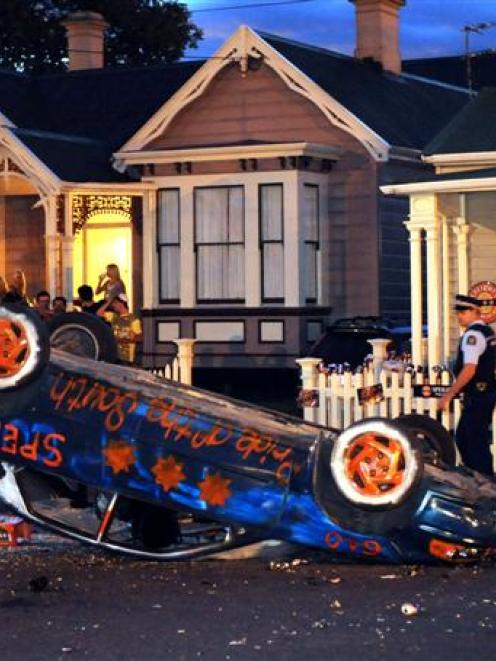 Police and students in Castle St, Dunedin, last night after a decorated vehicle was overturned. Photo by Stephen Jaquiery.
A Speight's beer promotion in Dunedin's student quarter has run into problems after a landlord complained notices stapled to doors had damaged his flats, and a car painted in the company's colours for the promotion was overturned in the middle of Castle St.

Police were sent to Castle St about 9pm yesterday after reports about 200 students were on the street and the car had been flipped. They left without making any arrests.

Dunedin businessman Jim Casey said he was "wild" when he learned notices advertising a free alcohol promotion had been stapled to the front doors of 13 of his Dunedin North flats.

The notices announced occupants would be rewarded "with a tray and maybe even a year's worth of Speight's".

Mr Casey, a former president of the Otago Property Investors Association, said he was annoyed paintwork on doors was marked by industrial staples advertising the promotion, based partly on beer-themed decorating of flats.

In recent years considerable effort had gone into improving and restoring flats, he said.

A related beer giveaway involving a truck, in Dunedin North last week, had been "insensitive" given community concerns about health and behaviour problems linked to excessive drinking, and damage to the city's reputation arising from misbehaviour involving the recent university student orientation toga parade in George St, Mr Casey said.

Lion Nathan officials had apologised over the stapling into doors and had taken a "very diplomatic" approach to his concerns, Mr Casey said.

Damage had not been intended and would be put right.

He had met Mr Casey's brother, Alan, in Dunedin yesterday and apologised.

Mr Todd, a former Dunedin resident, said he was proud of the community he had come from and would respond to queries from the Otago Daily Times after he had talked to Mr Casey today.

The Caseys are co-directors of Signal Hill Flats Ltd, which owns the 13 flats.

Jim Casey said the University of Otago had made positive steps to counter alcohol-related behaviour problems, and alcohol firms also had to play their part.