Beggars on streets of Dunedin 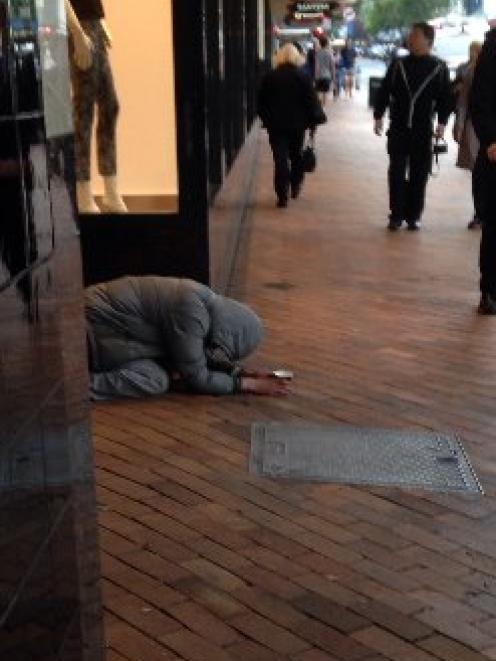 'Samuel' crouches, begging, behind an empty coffee cup in George St on Monday. Photo by The Star.
People are begging for money on Dunedin streets and social services are helping more people with nowhere to sleep, as the city's most vulnerable struggle on the margins.

There have been many reports of people asking strangers for money - and people begging on the footpath - in recent weeks.

Rising living costs and displacement in the wake of the Canterbury earthquakes have been linked to the sometimes shocking and all-too-obvious signs of personal struggle.

Outside the Meridian mall on Monday, a man, who was kneeling behind a stained paper cup, told The Star begging was his last remaining option.

"Samuel'' said he did not usually beg but had done it before. He was begging because he was short of grocery money.

He had moved from Christchurch to Dunedin about two months ago after he found he could no longer afford to live there. He did not have permanent accommodation in Dunedin, he said.

Meanwhile, the city's night shelter has reported a 46% increase in demand last year, following an increase the year before.

It was hard to pinpoint one cause of the increase but there was no doubt the economic situation had an effect on those at the lower end of the economic spectrum, Mr Brown said.

The Canterbury earthquakes and the increase in the cost of living as that city started to rebuild had seen some move south to Dunedin, he said.''

It's not a lot of people but we have noticed more people are moving down from Christchurch,'' he said.

Not everyone who used the night shelter was homeless and there were a variety of reasons why people might use the service, Mr Brown said.

There had been a trend of increased demand during the past two to three years, he said.

Salvation Army Dunedin community ministries manager Lindsay Andrews said more people were unable to cope financially and there was no other option for them but to sleep on the streets.

''The critical issue we are finding is that increasingly people are unable to afford to live,'' Mr Andrews said.

Homelessness was complex - it could even be a lifestyle choice for people who were so against the social system they chose to live on the street, he said.

The number of people in need of housing moving from Christchurch to Dunedin had increased, including three families in one week at the end of last year, Mr Andrews said.

A social housing shortage in Christchurch meant people had to move, he said.

''The need in Christchurch is pushing people in all directions for housing.''

said in the past two weeks he had been approached by people about two men who had been begging.

Const Gasson said both men were on benefits but were begging to supplement that income.

''There is nothing illegal about begging so from the police point of view we want to know if they are homeless and if they needed any assistance.''

It seemed some young men saw begging as a way to boost their income but that did not mean they were well off, he said.

Meridian mall manager Michael Porter said there had been a shift from buskers outside the mall ''to people who are just begging or are congregating in the area''.

Mall staff moved anyone who caused a nuisance or safety hazard, he said.

The Dunedin City Council has no bylaws addressing begging. A spokeswoman said the council had received no complaints about it.

In some centres, Work and Income has staff specifically assigned to deal with the homeless and very poor, but not in Dunedin.