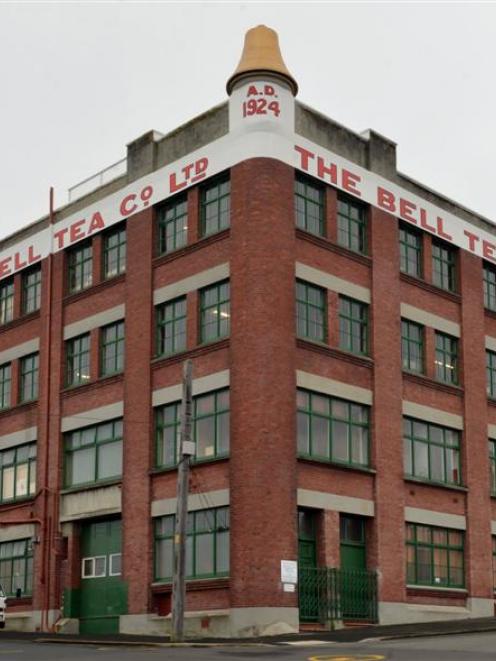 The Bell Tea and Coffee Co building in Hope St. Photo by Peter McIntosh.
New Zealand's oldest tea company, Bell Tea, is set to shut its Dunedin factory next month, ending more than 100 years of tea production in the city.

Bell Tea and Coffee Co chief executive Mark Hamilton travelled to Dunedin yesterday to tell the factory's 10 staff the cost of earthquake strengthening and other required work - estimated at more than $1 million - meant its operation was no longer viable.

Staff were ''shocked'' when told about the plan yesterday, but were more understanding when told the decision was because of staff safety, Mr Hamilton said.

Consultation over the plan would finish on Thursday next week, but in ''all likelihood'' the factory's 10 jobs and equipment would be shifted to Auckland, he said.

If the staff wanted to relocate, they would be guaranteed jobs at its East Tamaki factory, which now has 180 staff and produces the majority of its tea.

Closing the factory was a ''tough decision'' given the company had invested ''a lot of money here over the years'' - including spending a significant amount of money on new machinery five years ago - and its long history in the city.

The Bell Tea and Coffee Co building in Hope St. Photo by Peter McIntosh.
''Dunedin has been producing Bell tea since 1898 and in that plant since 1924, so it's been going on a long time with a lot of history,'' he said.

The decision comes after a review of the earthquake standards of its buildings was prompted by Christchurch's February 2011 earthquake.

The quake destroyed its Christchurch building, which housed six staff.

''That building was subsequently demolished and we were very, very lucky that no-one was injured then.''

The company went in with the intention of upgrading its Dunedin factory - which was found to be less than the minimum of 34% of new building standard for earthquake strength - but the extra work required to meet fire regulations and other standards meant it was going to cost ''well over a million dollars''.

The need for earthquake strengthening was not being used as an excuse to shut the facility and it was nothing to do with the company being sold to Pencarrow Private Equity by Foodstuffs New Zealand last September, he said.

He was keen to point out there would be no interruption for its customers and the product would stay New Zealand-made.

''We are fortunate ... that we have got an Auckland facility that is producing exactly the same product, so we are able to keep our production in New Zealand by transferring our equipment to Auckland.''

''The majority of our tea is already produced on our Auckland line. That's approximately three million tea bags per day.''

The Dunedin factory produced tea for the South Island market.

Auckland staff would be told about the plan today.

If the plan went ahead, the building would be put on the market and Mr Hamilton believed it would be a ''fantastic'' site for accommodation or housing.

Dunedin Mayor Dave Cull said it was a ''great shame'' a Dunedin ''icon'' was going to leave the city.

The news was more evidence that old-style jobs were ''moving on'' from Dunedin and the city's future was in high-tech industries, Mr Cull said.

''I contrast it with the fact we are getting 60-odd more jobs at Fisher and Paykel design centre,'' he said.

Tea brands produced by Bell Tea in Dunedin included Bell Tea and some of the Twinings range.

The Bell Tea and Coffee Co was founded by Norman Harper Bell, who was born in Melbourne and gained his expertise in the tea industry with the Robus Tea Co.

He arrived in Dunedin in 1894 and joined R. Wilson and Co and in 1898, the trademark Bell Tea was registered.

In 1905, having dissolved the partnership with R. Wilson and Co, and bought Bell Tea and other trademarks, Mr Bell and two new partners started trading as the Bell Tea and Coffee Co.