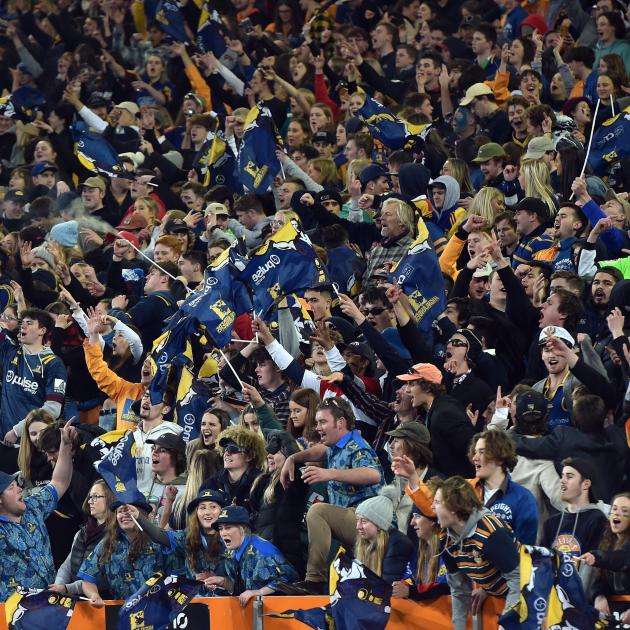 A big crowd barracks for the home team, the Highlanders, during their clash with the Chiefs in the opening game of Super Rugby Aotearoa at Dunedin’s Forsyth Barr Stadium on Saturday night.PHOTOS: PETER MCINTOSH
It was already a big occasion for a big crowd — and then the home team scored a memorable victory.

The match between the Highlanders and the Chiefs on Saturday evening — the first in the new Super Rugby Aotearoa competition — had a dramatic finish when Highlanders substitute Bryn Gatland slotted a dropped goal with time almost up on the clock and his team held on to win, 28-27.

Mr Clark said the game was a chance for people to gather to celebrate — not just a sporting occasion but to share in a large event post-lockdown.

"Everyone wanted to get out and celebrate as a country."

Mr Clark said the Highlanders had worked hard through difficult circumstances in the lockdown and after it.

"That showed on the field," he said. 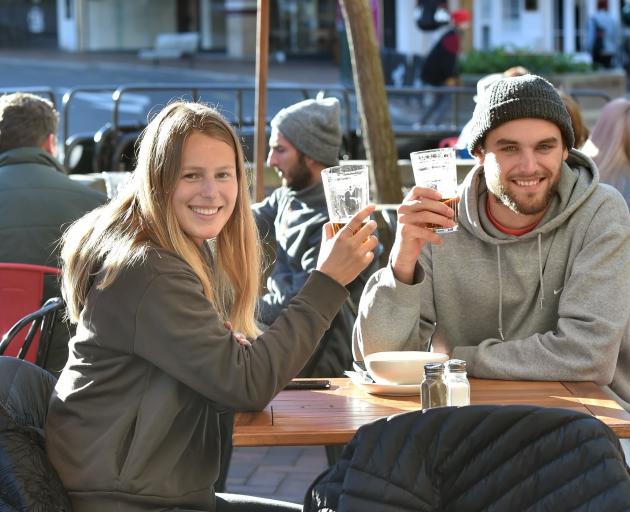 Neve Doak and Max Anderson, both from Auckland, enjoy a drink in the Octagon on Saturday before Dunedin hosted the first game of Super Rugby Aotearoa.
Enterprise Dunedin director John Christie said hosting the first game of professional rugby with a crowd since the Covid-19 crisis was fantastic for the city.

"It’s one of the first big sporting events back on the calendar.

"The Highlanders getting a win really topped it off."

It was the first weekend under relaxed Alert Level 1 restrictions and that coincided with university health science students celebrating the end of exams.

Three men at the game may have gone a bit far, however.

One man streaked across the field nude and two more invaded the pitch.

They were arrested at the game and charged with offensive behaviour, police said.

The men are due to appear in the Dunedin District Court this week and they have been trespassed from the stadium.

Dunedin’s bars did well out of the sporting and social occasion.

"It was good to see people out and about."

Craft Bar and Kitchen owner John McDonald said people flowed into the bar before and after the game.

"The vibe was outstanding."