By David Loughrey
1 Comment
Spring has already brought 152 motherless ducklings to a Dunedin bird rescue organisation that is on the lookout for foster families for the fluffy foundlings.

Bird Rescue Dunedin founder Sue Cook said the organisation was getting more and more orphaned ducklings as people heard about her charity funded organisation, one of few that offered to look after them.

Ms Cook said people were bringing them from as far away as Queenstown and around the lower South Island.

With so many coming in, foster carers were needed, though it was important they had the right set-up, and the knowledge to care for them. 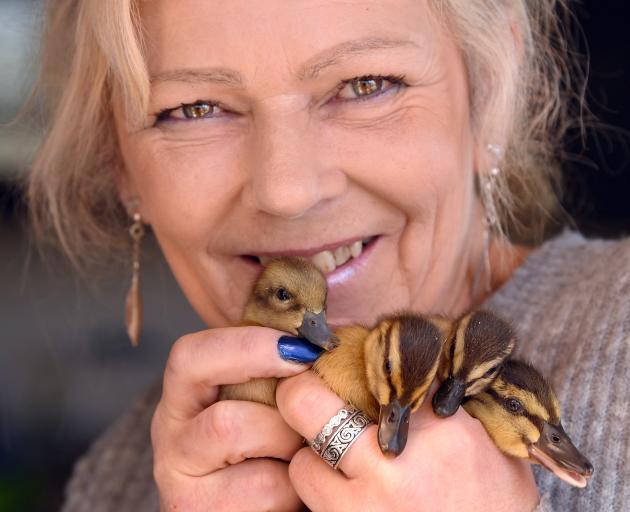 Bird Rescue Dunedin founder Sue Cook with some of the 152 orphaned ducklings brought to her this spring. PHOTO: STEPHEN JAQUIERY

The pay-off was seeing the birds return to their natural home.

However it was "awesome seeing them released and how excited they are when they see a great big pond''.

The ducklings were found by people in situations including where their mother had been run over on the road, where the ducklings had fallen into a drain, or had otherwise become lost without their mothers.

Once people expressed an interest in fostering, Ms Cook said she checked their set-up to care for the birds, and made sure they knew what they were doing.

That was reasonably simple; a plastic tub, a desk lamp with a 75-watt bulb to keep them warm, and a poultry drinker that the birds could not climb into.

"The biggest problem is people put them in water, they think they should be in the water and they get soaked to the skin, they get a chill and they die.''

After they had grown, they could be kept outside in a shelter, and at 11 weeks old they were ready to be released into the wild. At 12 weeks they could fly.

More and more ducklings were being brought to her organisation each year.

There were 12 ducklings yesterday at the Musselburgh home of Bird Rescue, though many more were expected to arrive

"We're only at the beginning,'' Ms Cook said.

Contacts numbers could be found on the organisation's Facebook page.

What a nice caring lady,