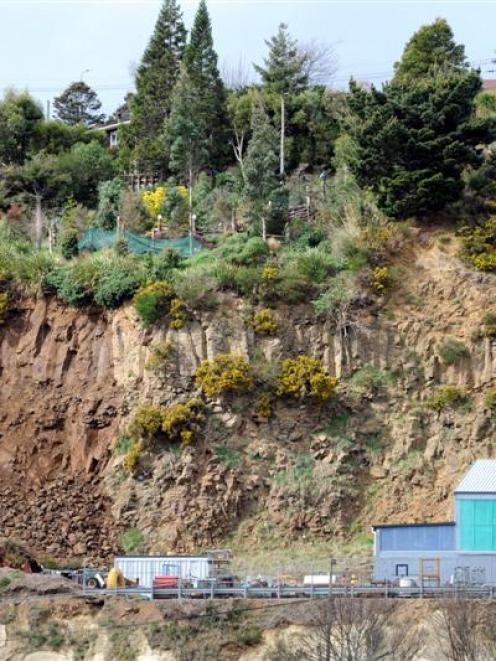 Several tonnes of soil and rock which fell 30m into an industrial machinery sales yard in Stone St, Dunedin, yesterday. Photo by Stephen Jaquiery.
Workers at a Dunedin business thought a large truck was making an unscheduled delivery yesterday afternoon - but the "rumbling" they heard was several tonnes of debris falling from a 30m cliff on to the rear of the Kaikorai Valley premises.

Tom Rietveld, owner-operator of second-hand industrial machinery dealer W Rietveld Ltd, in Stone St, described the rockfall as sounding "like the noise of a large truck passing by".

"They probably heard it more on other side of the valley," Mr Rietveld said.

"Some people described it as sounding like a house-moving exercise gone badly wrong."

Although small amounts of debris often fell from the steep bank, the slip was the largest he could remember at the site, which the company had occupied since the mid-1960s.

The area occupied by the machinery yard was a quarry in the 1950s.

A "no-build zone" policy at the top of the bank had lapsed about 10 years ago, he said.

"I am not saying the slips are caused by houses. But, in my opinion, the houses have directed water towards the cliff top.

"In saying that, planting vegetation both slows erosion down and allows water in to the soil."

Police briefly cordoned off nearby roads.

Dunedin City Council staff visited the premises after the slip yesterday and declared the area safe.