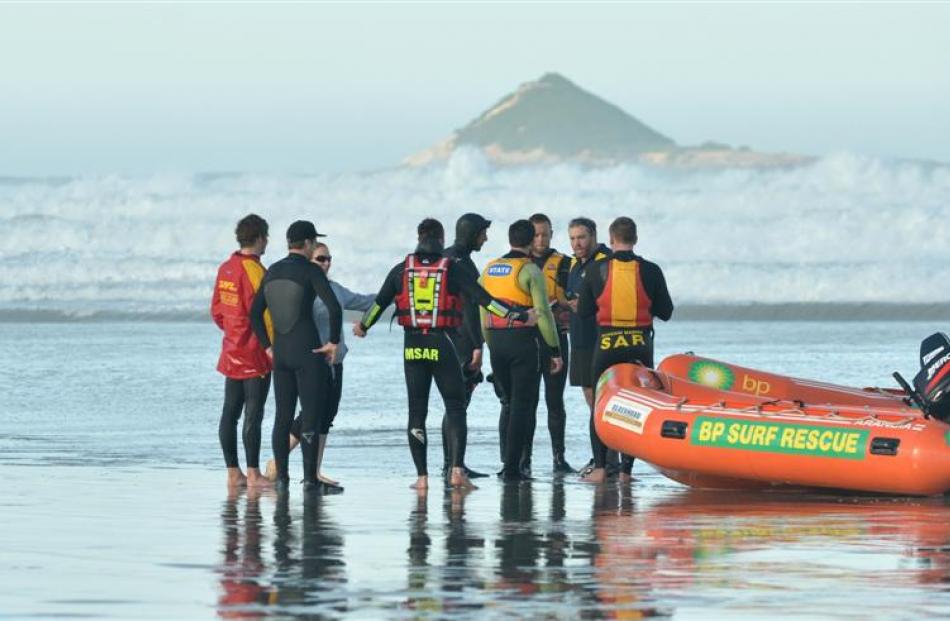 Surf life-savers and two of the four surfers rescued yesterday chat after a jet ski and the surfers were taken and towed to safety from near Green Island, pictured in the background. 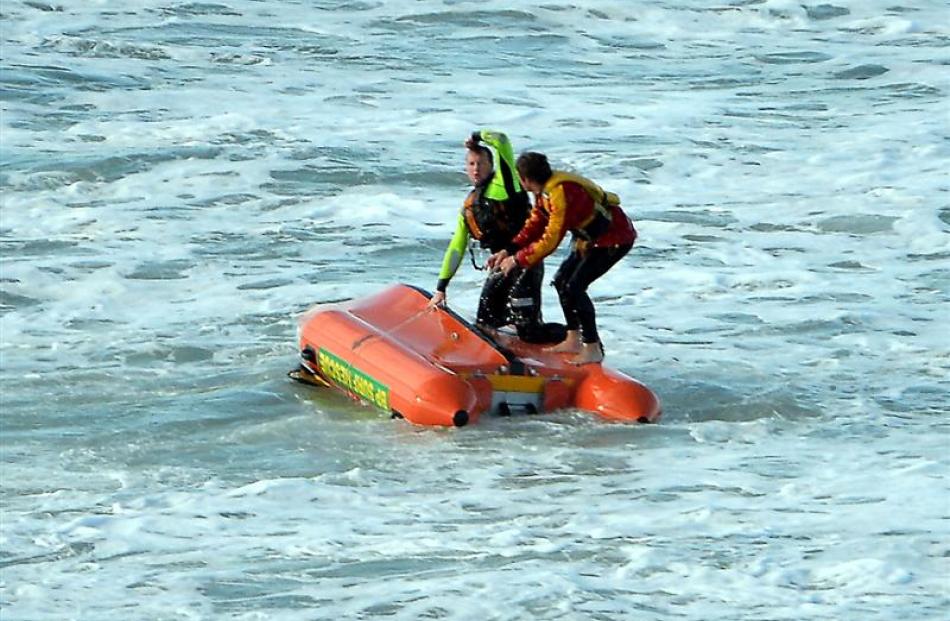 Surf life-savers Rhys McAlevey (left) and James Rolfe almost needed rescuing themselves when their inflatable rescue boat tipped over in the rough surf. 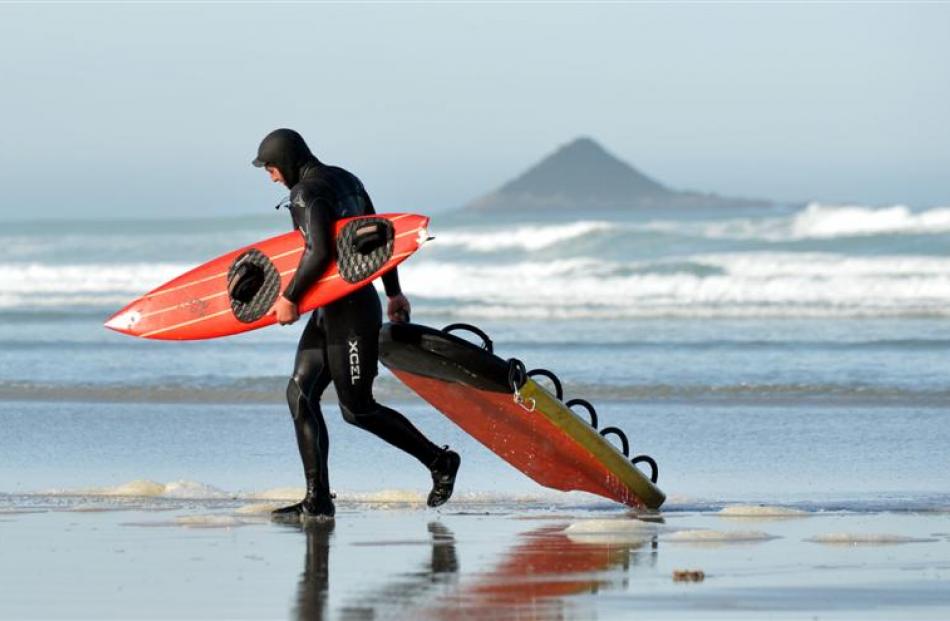 Surfer Dan Smith, of Christchurch, hauls in some of the group's gear after it was taken to shore by life-savers yesterday. 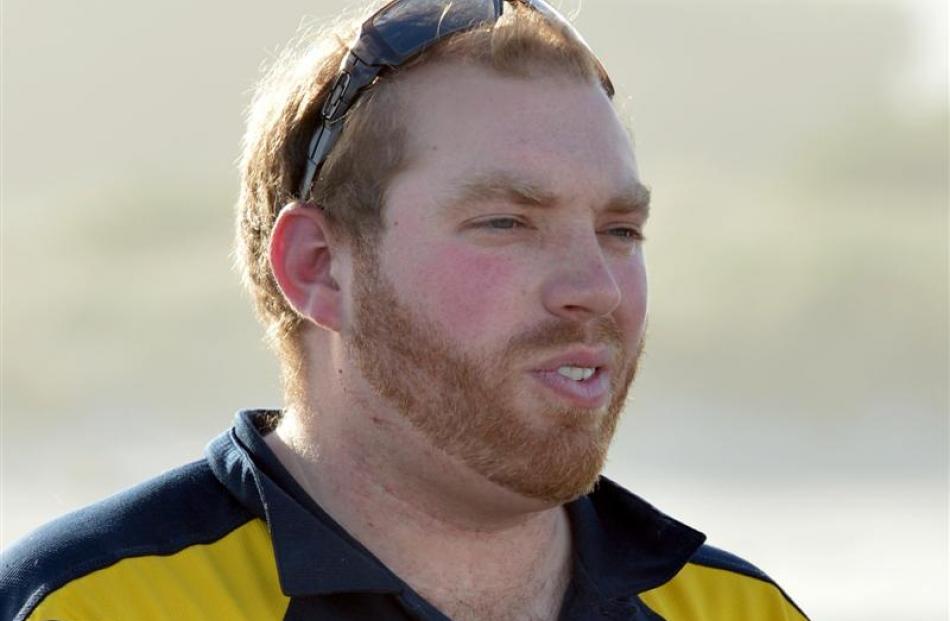 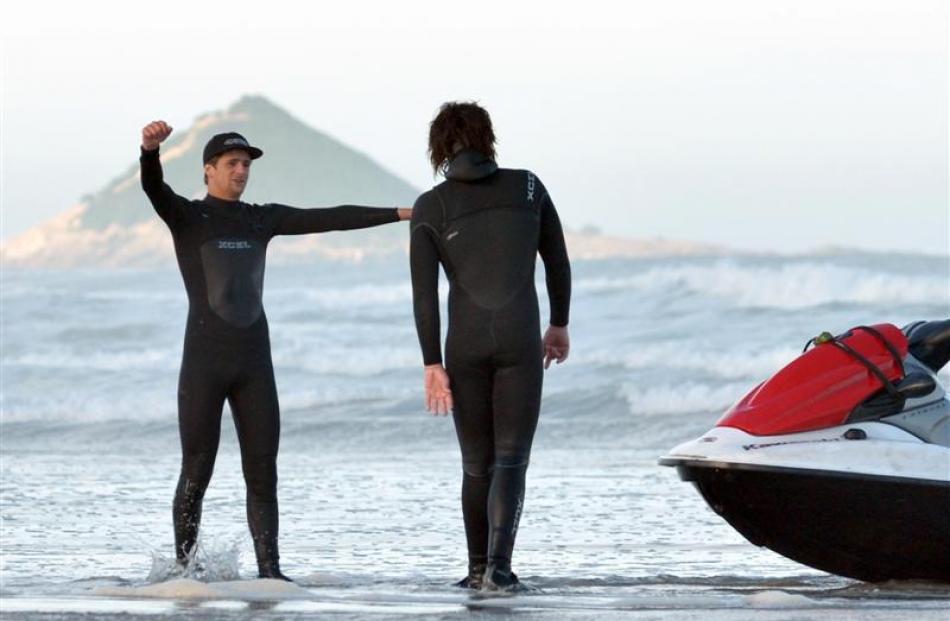 Dan Smith (right) chats to a fellow surfer, who declined to be named, after their jet ski was towed to shore by surf life-savers. Photos by Peter McIntosh.

Surf life-savers fought massive waves in an action-packed rescue yesterday after a group of four big-wave surfers got into trouble off the Brighton coast.

The Christchurch group, led by ''world-renowned'' big-wave surfer Doug Young, were near Green Island, which is about 2km off the coast, when a rope was sucked into the impeller of the jet ski which towed them out to the ''well-known'' big-wave spot.

Surf life-saver James Rolfe, who took a dip when the IRB he was in flipped in a large swell after dropping three of the surfers to shore, said the waves near Green Island were ''ridiculous'' and the biggest he had seen in the Dunedin area.

''It's the biggest wave you would get around here, besides Papatowai,'' Mr Rolfe said.

One of the four rescued, Dan Smith, who is a surf life-saver, said group members were experienced and would have been able to make it to shore on their own had they not been rescued.

He had started swimming to shore when they were picked up, and the initial plan had been to ask friends in Dunedin to come and get the two who stayed with the jet ski.

He was unsure exactly how long they were in the water before being rescued, but reckoned it was a ''couple of hours''.

The area near the island was a ''well-known big wave spot'', he said.

Another member of the group, who did not want to be named, said the life-savers saved them a lot of hard work.

''We would have been fine, but it would have taken a lot longer,'' he said.

Mr McPhee said it was a challenging rescue.

''It's just really difficult conditions. It should have been something simple, but when you have got two to two-and-a-half metre waves coming in, it just makes things pretty challenging.''

The surfers were lucky there was cellphone reception in the area or they would have faced a long day in the water.

''The only advice for people is to ensure they have at least two forms of communication.''

Being well-trained ''nationally regarded'' surfers, the four were unharmed and would probably have been fine, if a little tired, had they not been rescued when they were.