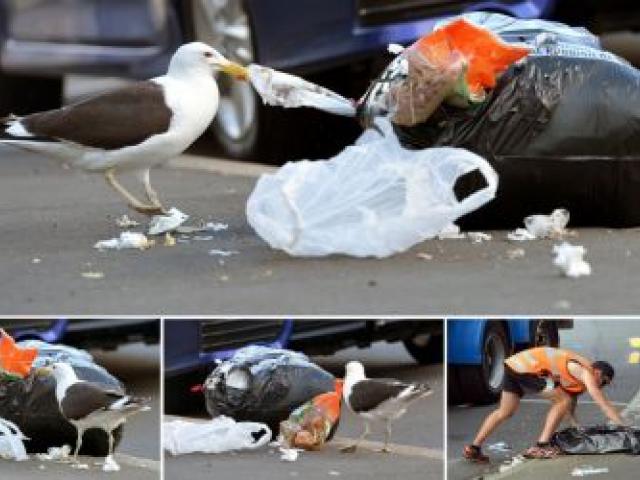 People who put their rubbish bags out early are annoying him, too.

It is illegal in Dunedin to put out household rubbish bags before 7 o'clock the night before scheduled collection, but some people appear not to be aware of the rules, York Pl resident Roy Kenny says.

He is backed up by rubbish collection agent Envirowaste, which says it might be time to remind people of the rules.

Mr Kenny contacted the Otago Daily Times yesterday, as seagulls dined out on the contents of several split rubbish bags in the street near his home, to say he had been concerned about the situation for some time.

Yesterday, he had had to call on city council staff to come and wash down the footpath after Envirowaste had collected the scattered rubbish.

He said he had complained to the council about the bags, but felt his concerns fell on deaf ears.

The council needed to supply inner city and North Dunedin residents with stronger bags or a wheelie bin, he suggested.

Asked if he thought the cost of the latter might be prohibitive, he said bird-strewn rubbish was not only a nuisance, it was a bad look for the city and, more importantly, an environmental health risk.

Envirowaste branch manager Vaughan Adams said birds were always an issue, but it was more often cats and dogs, or people putting glass in rubbish bags, that split them open.

However, rubbish truck drivers had ''certainly'' noticed a marked increase in seagulls around rubbish bags this year.

''I'm convinced the bird thing is drought-related. I haven't seen it like this before. Maybe, they are hunting for food.''

It was a good time to remind people they could be prosecuted for putting out rubbish bags before 7 o'clock the night before scheduled collection, he said.

''I'm not sure people are very aware of that.''

Dunedin ornithologist Lyndon Perriman said the warm weather had resulted in plenty of food in waterways, so he did not think most seagulls would be looking for food elsewhere.

Seagull chicks were fledging at the moment, so adult birds would have more time on their hands, which might account for increased sightings.

Dunedin City Council water and waste manager Dr Laura McElhone said councillors decided to introduce the black plastic bags at the most recent review of the service, about three years ago, because they wanted people to be conscious of how much waste they were producing.

People would probably throw out more if they had a wheelie bin, she said.

There had been no apparent appetite so far to change from black bags and it was unlikely it would be seriously reviewed by councillors until the contract for the rubbish collection came up again, in 2017.

Bird-proof rubbish bags had not been investigated thoroughly, although it might be difficult to find something that could withstand birds, cats and dogs, she said.