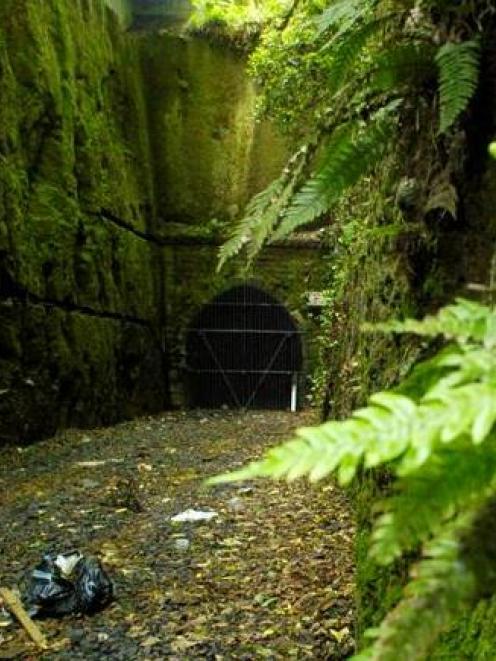 An entrance of the Caversham tunnel. Photo: Gerard O'Brien
Auckland's deadly gas blast - which claimed the life of a worker - is a "tragic reminder" the same threat could lurk inside Dunedin's Caversham tunnel, a Dunedin City Council manager says.

The explosion, which occurred inside a large-diameter water main, also injured six other workers, including network engineer Ian Winson, who lost part of both legs.

Methane gas had been detected at the site, but the exact source - and the cause of the explosion - had yet to be determined.

Mr Mackie said yesterday there was a real risk the same sort of explosion could happen inside the Caversham tunnel if methane gas leaked from a council-owned gravity sewer which ran through the tunnel.

It could not be assumed the tunnel would be safe just because it had openings at both ends and air running through it.

In Auckland, Watercare workers had been operating air extractors and opened vents inside the water main before the explosion, he said.

Air extraction was also being carried out at the West Coast Pike River coal mine, but this did not prevent an explosion, he said.

Methane gas, in particular, only needed to build up to low concentrations before it was capable of exploding.

Last month, Mr Mackie had delivered a blunt warning to councillors, during 2011-12 draft annual plan deliberations, about the risk of methane and hydrogen sulphide gases escaping into the tunnel.

He pointed to fatal accidents overseas caused by gas build-ups in confined spaces - including a 1988 methane-gas explosion inside a sewer in the United States - as an example of what could go wrong.

That did not stop councillors committing to reopening the tunnel to cyclists and pedestrians, subject to further studies and safety work, and budgeting an extra $100,000 to pay for the work to begin.

It also did not stop councillors again debating the merits of the Caversham tunnel project during this week's full council meeting, called to confirm draft annual plan decisions ahead of final confirmation on June 27.

Cr Neil Collins, speaking at this week's meeting, said the situation that led to the Auckland explosion "was not a mile apart" from that in the Caversham tunnel.

He wanted the council's pledge to reopen the tunnel, and the $100,000 funding allocated, removed from the draft annual plan.

However, his move was defeated at a vote after other councillors argued against it.

Cr Kate Wilson - a member of the working party exploring reopening tunnel - said a thorough review, funded by the $100,000 budgeted, would examine whether the tunnel was safe for public use.

There were "quite clear distinctions" between the fatal accidents overseas cited by Mr Mackie and the situation in the Caversham tunnel, she said.

Cr Lee Vandervis went further, saying there was no link between the Auckland explosion and the "vastly different" situation inside the Caversham tunnel.

Cr Colin Weatherall said the risk inside the Caversham tunnel was minimised by the air flowing through the tunnel between its two open ends.

Mr Mackie yesterday took issue with some of the comments, insisting the risk of an explosion inside the Caversham tunnel and the tragedy in the Auckland water main were directly comparable.

The Auckland explosion was a "tragic reminder" of the threat.

Major road rerouting back on agenda