Board member convicted of assault 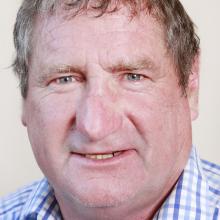 Bevan Dowling.
A local government representative will keep his job despite being convicted of assaulting a woman following a trip to the pub.

He came home from a hotel on the evening of May 22 and argued with the victim, the court heard.

Dowling told her he wanted her to leave the house before grabbing her and "forcibly" removing her from the property.

"He kicked out at her when doing so," court documents said.

A chair leg was broken during the melee, according to police.

The victim received bruising and abrasions but did not require medical attention.

A police summary of facts showed  it was not the first time they had been called to the defendant’s home over such an incident.Dowling was convicted and sentenced to six months’ supervision.

Judge Kevin Phillips said he had "no sympathy whatsoever" for the defendant and ordered him to attend alcohol counselling and a Stopping Violence programme.

He did not care that the Hyde man might find it difficult to attend the therapy sessions.

The judge also granted a protection order in favour of the victim.

Despite the conviction and the damage to his reputation, Dowling is legally allowed to represent his community because the charge to which he pleaded guilty holds a maximum penalty of one year’s imprisonment.

Under the Local Government Act, a board member is disqualified from serving if they are convicted of an offence carrying a potential jail term of two years or more.

"I think he should do the honourable thing and stand down from the community board," she said.

"With this issue finalised, hopefully we can now get back to business ...  Let’s face it, it’s not a good look for a community board if one of its members find himself in a position like this."

Board chairman Barry Williams had previously given Dowling his backing but did not respond to messages asking for comment  yesterday.

But another board member, Joan Wilson, was happy to place herself in the defendant’s corner.

She said the fact Dowling had assaulted a woman made no difference to her view of him.

"People go off the rails now and again but he doesn’t do it all the time," Ms Wilson said.

"I’m quite happy at any time to work with him ... He has always done a very good job."

Neither was she concerned people would take her stance as  condoning violence against women.

"Not at all. Anyone who knows me would know I definitely do not," Ms Wilson said.

He said his client had no comment and Dowling could not be reached for comment. The next Strath Taieri Community Board meeting is  on Thursday.