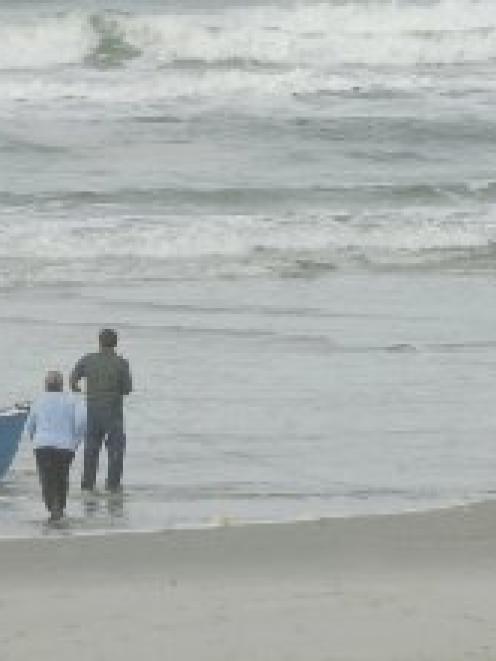 Senior Constable Fred Jansen (at right), of the Mosgiel police, and others help secure a small boat which capsized at Taieri Mouth on Saturday. Photo by Jane Dawber.
Two Dunedin men, both aged 23, suffered moderate hypothermia and were flown to Dunedin Hospital by the Otago Regional Rescue Helicopter after a 4.5m motorboat capsized on a bar at Taieri Mouth on Saturday.

It was the second small boat to capsize at the river mouth on successive weekends.

The motorboat Delilah capsized near the Motorata Island Scenic Reserve, at the north side of the river mouth about 12.30pm, and the two occupants were able to right the boat and make their way ashore.

Six local first responders, assisted by members of the public, helped the men by removing their wet clothes, warming them with blankets and hats and sitting them in cars until the rescue helicopter arrived.

The men were brought up from the beach via the track and uplifted by the rescue helicopter, he said.

The wooden boat was in excellent condition and the men were wearing life jackets, Acting Senior Sergeant Chris McLellan said.

Otago marine search and rescue adviser Keith Simon, of Taieri Mouth, warned that conditions at bars could change quickly and reminded boat users about the risks of crossing them in small craft.

The Taieri first response group is affiliated to Dunedin marine search and rescue.