Body cameras introduced: 'We're not here to be abused' 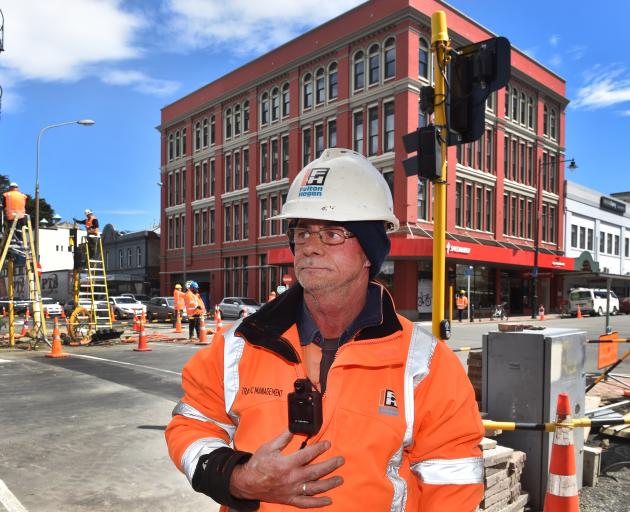 Wearing one of the company's new body cameras is Fulton Hogan site traffic management supervisor Dave Boath, of Dunedin. PHOTO: PETER MCINTOSH
Dunedin traffic controllers have been fitted with body cameras to deter harassment and abuse from members of the public.

But the cameras did not capture an incident yesterday, where a man drove at a Fulton Hogan worker before subjecting him to a vulgar insult.

Fulton Hogan traffic management department manager Richard Wood, of Dunedin, said the company had bought two of the cameras about one month ago.

They are fitted to the high-vis vests worn by traffic management staff, recording a live view of everything they see, while also displaying the footage on a forward-facing screen to let people know they are being filmed.

Mr Wood said the company hoped the cameras would act as a deterrent to the minority of drivers and pedestrians frustrated with roadworks who took their anger out on workers.

"When people see them they tend to back off."

Site traffic management supervisor Dave Boath wore one of the cameras yesterday as he worked near the NZ Transport Agency cycleway project in Cumberland St.

He said staff frequently copped flak from the public.

Mr Boath appealed for motorists to be patient over roadworks.

"We're not here to be abused. We're here to keep them safe."

"Show a bit of patience. You will get there eventually."

A Fulton Hogan staff member abused by a motorist in central Dunedin yesterday morning was not wearing the camera.

A witness said the motorist was travelling east in Stuart St when he sped through the Cumberland St intersection, under stop/go traffic control, and drove past a worker holding a stop sign before driving directly at a Fulton Hogan worker.

He then stopped, got out of his vehicle and verbally abused the worker.

The driver then left the scene, before returning several minutes later to remonstrate with a site manager.

Typical of impatient and arrogant Dunedin driving. No respect for other, legitimate, road users.

Pretty sad example of a human being. Especially when you consider that the local contractors put themselves at risk to better our community.

Take the drivers licence off him. He's obviously "unfit" to hold onto it.