Bombproof way to see the world 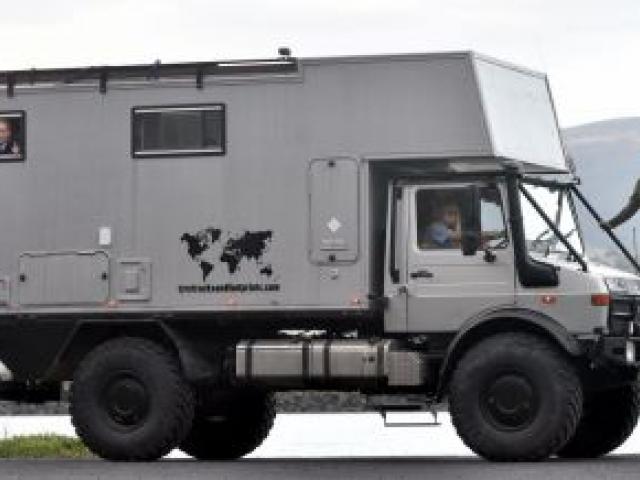 Former Dunedin man Dave Clark stands on his Unimog campervan while his nieces Mikayla (10, left) and Aleisha (13) Wood look out from inside the vehicle. Photo by Peter McIntosh.

What do you do when you want a change from your construction job?

Well, if you are former Dunedin man Dave Clark, you buy an old Unimog truck, turn it into a campervan and travel the world for nearly two years.

Mr Clark (35), a builder, bought the U1550 Unimog from a German power company when he was relocated to the UK for work in 2012, and spent about six months rebuilding it with a fully-equipped cabin.

The cabin was made from fibreglass, steel, ply and styrofoam.

In January 2014, he set off on a trip that covered 30 countries from Europe to central Asia, Mongolia and Russia, returning to the UK late last year.

The truck arrived back by ship to Auckland, where Mr Clark lives, in January, before being driven to Dunedin so Mr Clark could visit family.

What made him do up the old truck and travel through some of the farthest reaches of the planet?

"I wanted a change from construction, and something to do with travel, so I decided to start a company building expedition trucks,'' Mr Clark said.

He had since bought another vehicle, which would be sold to the European market, and the business, Clark Global, would be operational within two weeks, he said.

It was powered by two solar panels to charge its battery systems and cost $250,000 to build.

That included the purchase of the truck, for about $85,000, Mr Clark said.

Still, the truck required maintenance, and it was not a journey which could have been done anyone, he said.

"You have to be a real all-rounder to actually survive it.

"There are no electricians, no mechanics. You don't have anything like that - you're just on your own.''

The truck had travelled about 75,000km since it was built and had been to some interesting places, he said.

The hardest country to travel through was Turkmenistan, whose customs officials took 29 hours to clear Mr Clark, while Uzbekistan was also "very thorough''.

Mr Clark travelled just over half the time by himself and the rest of the time with a friend. He planned to take the truck through Africa at the end of the year.