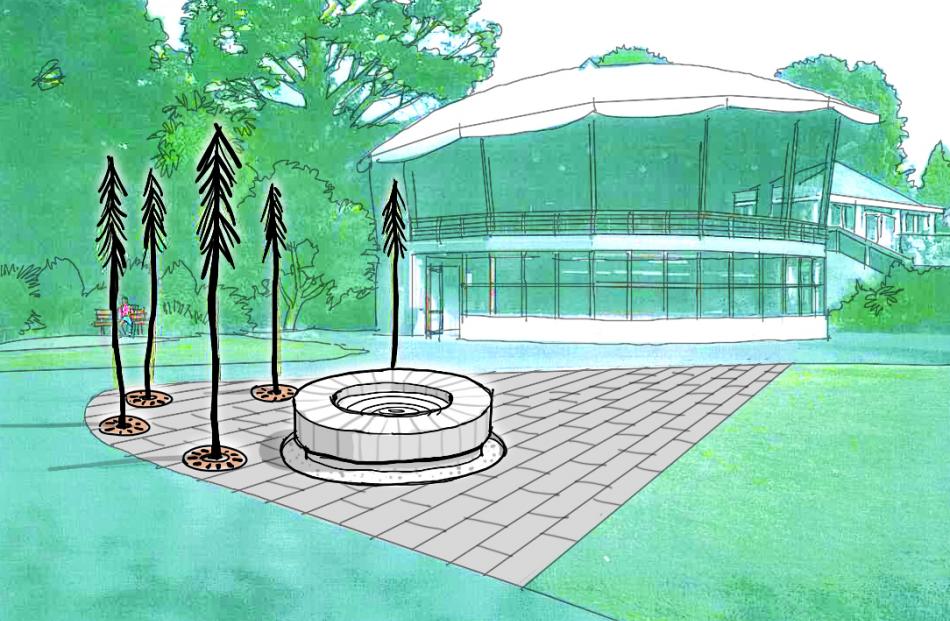 This artist's impression of the proposed sculpture met with barely disguised outrage.

If art is meant to provoke a reaction, then the Friends of the Botanic Garden's proposed 150th anniversary sculpture for the Dunedin Botanic Garden has achieved its purpose before it is even installed.

An artist's impression of the proposed sculpture to mark the garden's birthday met with barely disguised outrage from Dunedin city councillors yesterday when they came to consider a request to release bequest funds for the project.

Botanic garden staff sought permission from councillors to release the remaining funds from the Clive Lister Bequest in the 2013-14 financial year, so they could commission and install a $60,000 sculpture by Christchurch artist Stuart Griffiths, and create a $130,000 extension of the Lister Garden in the central lower garden.

They said they could not even tell if the drawing presented actually was the sculpture, did not know its cost and context within the garden and had no details about how the Friends had arrived at their decision.

Parks and recreation services manager Mick Reece explained the costs and that the proposed sculpture was a stainless steel well head, designed by Christchurch artist Stuart Griffiths, who had designed several other of the garden's sculptures in conjunction with the Friends.

Cr Lee Vandervis said even though it was not funded by ratepayers, council permission was needed to release the bequest, so people would think it was the council's decision and ''blame'' the council if they did not like it.

''Given the awkward history we have about sculptures here, I really do question how the spending of money on replacing a round flower bed with another round thingy is going to be welcomed by the public.''

Cr Richard Thomson said he was ''really disappointed'' with the process and lack of information and struggled to understand the drawing.

He said he was so confused, he initially thought some trees pictured in the drawing might have been the sculpture.

''I can't put this into a context and I think we will be opening ourselves up to significant potential derision ... people will have a similar reaction as we have.''

Crs Kate Wilson and Jinty MacTavish said they were disappointed a local artist had not been sought and that there had not been more public involvement in the process.

Cr MacTavish said it was her experience that the community at large did take an interest in what public art looked like in popular spaces.

''Let's use this $190,000 to really celebrate the 150th. This doesn't do this. This process has the potential to mar the 150th process and celebrations, which I think would be unfortunate.

''I find there is a lot missing from this proposal.''

Picking up on the ''discomfort'' around the table, chief executive Paul Orders suggested councillors could leave the report on the table and request more details on the project and options for the sculpture.

Councillors subsequently approved in principle that the remaining Lister funds be used to expand the Lister garden, including a sculpture, but requested a further report for their council meeting next week, with more details and other options, noting that they did not want to be choosing or influencing designs, but wanted to see options had been considered.

The intention is that the work will be unveiled at the Fifth World Botanic Gardens Congress in Dunedin in October.

The $235,401.60 1997 bequest from Prof Clive Lister was accepted by the council to develop and maintain a place in the garden that he loved.