By George Block
7 Comments
Dunedin police have appealed to the public for help after a miniature horse was stabbed 41 times in a "horrific attack" in Waitati.

Star, a 10-year-old calf-sized horse, was found with stab wounds, including one near the jugular, in his paddock following the midnight attack in the small seaside town on Sunday.

Veterinarians were yesterday optimistic about Star's chances of recovery. However, the owner said today that one wound had punctured the animal's bowel and he had died overnight.

Inspector Matenga Gray, of Dunedin, said police were yesterday alerted to the attack near the corner of Brown and Pitt Sts and had visited the scene and spoken to the owner.

"A vet assessment revealed that the injuries to the horse appeared to have been caused by a blade or similar," Insp Gray said.

"The horse has since died and we extend our sympathies to the owner in what is clearly an horrific attack on this beloved pet."

Police inquiries were continuing. They would like to hear from anyone who was in the area about midnight on Sunday and who saw or heard anything unusual. Alternatively they can call Crimestoppers anonymously on 0800 555 111. 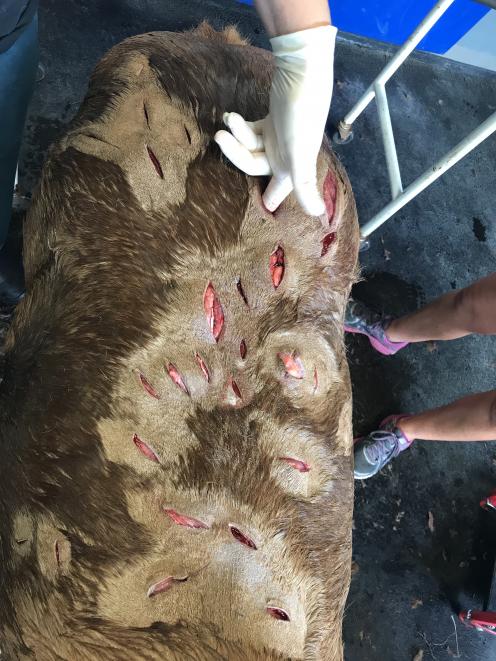 Star's owner, who did not want to be identified, confirmed today that her beloved pet had died overnight.

"I'm so angry, I'm so disappointed, and the thing that was getting me through this was that the little guy was going to pull through," she said.

"One of those tiny little cuts actually perforated his bowel and they came in this morning and he was dead.

"A f***** lunatic with a knife is in our community and killed a little baby horse.''

The owner said her friend was walking a dog near Star's corner paddock at the intersection of Brown and Pitt Sts, when he heard whinnying. He discovered that Star was no longer tethered, and a trail of blood led down the road.

Following the trail, the owner said he found the "little bloodied horse'' still alive a short distance down the road.

The man went to alert the owner, and together they managed to get Star into a float and transport him to the Otago Equine Hospital in Mosgiel.

The owner said she was shocked and frightened to discover someone would attack her beloved horse.

"He's tiny, he's cute, he's about the size of a calf, and some [person] just went to town stabbing him.

"Whoever this [person] was actually cut the horse free. He was tethered in the paddock - he ran down the road leaving a trail of blood."

She had no idea why someone would have attacked Star.

Otago Equine Hospital veterinarian Peter Gillespie said he believed more than one person was responsible for the injuries.

Despite Star suffering 41 puncture wounds and a huge loss of fluid, veterinarian Stephanie Bransgrove hoped he might survive, after operating for about five hours through early yesterday.

Once the horse was treated, Dr Bransgrove discovered the wounds were too clean and deep to have been sustained during a dog attack, as they initially suspected.

Dr Gillespie said when Star was admitted, about 3am, he, too, thought it was a dog attack. But It eventually became clear the wounds, including one near the jugular, were created with a sharp knife, not with a dog's teeth, Dr Gillespie said.

"Far too clean and far too deep - teeth would actually tear the skin. The edges are like what we would create when we do a surgical incision.'' 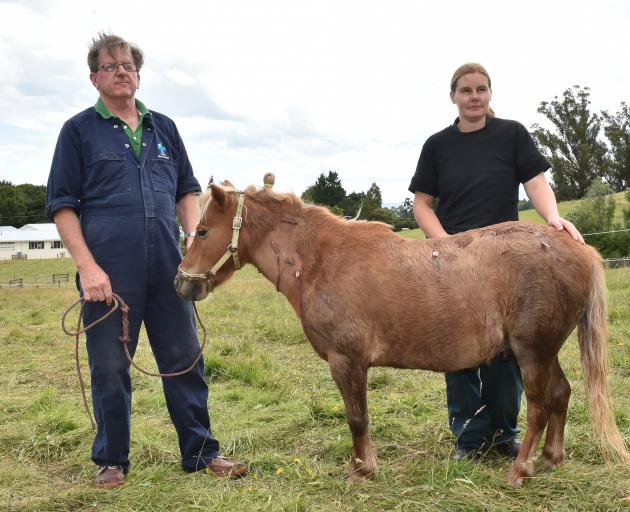 After being stabbed in a vicious attack in his Waitati paddock at midnight on Sunday, miniature horse Star recovers with Otago Equine Hospital veterinarians Peter Gillespie and Stephanie Bransgrove. PHOTO: GREGOR RICHARDSON & PETER GILLESPIE
Dr Gillespie had seen nothing like it in his long career, and believed at least two people may have been involved in the attack as the horse would not have stood still while being stabbed.

"I've been doing this for close on 40 years and this is just the worst, most distressing thing I've ever seen."

A fundraising page for Star had closed following his death. A message on the page said the $8538 donated would be used to pay for outstanding vet bills for Star's treatment.

Nab them. They are dangerous to beasts and people.

Good chance these cretins wanted to experience the “thrill” of stabbing someone or something. If they weren’t so cowardly, it could just as easily been a person this time and, who knows, next time it just might be. That this poor, defenceless, beautiful little horse had to die such a horrible, agonising death just so that someone could get their jollies is truly beyond belief.

Small community hope someone has an idea who it is, if I was in charge of justice I'd make this physco suffer big time!!!

Oh my, there are some really vile people out there. What a truly disgusting thing to do.

I was very disappointed to hear that the little pony was attacked, and sad to hear that it died. I walk past there maybe once a month, and I have seen the little ponies before, and I thought they looked well cared for and happy. Seeing them was an uplifting part of my walk. Whoever did this is sick on so many levels. I hope they catch that person soon. What kind of Kiwi would do this? He/she does not belong on our streets.

These people deserve to be strung up . No living being should be treated this way.