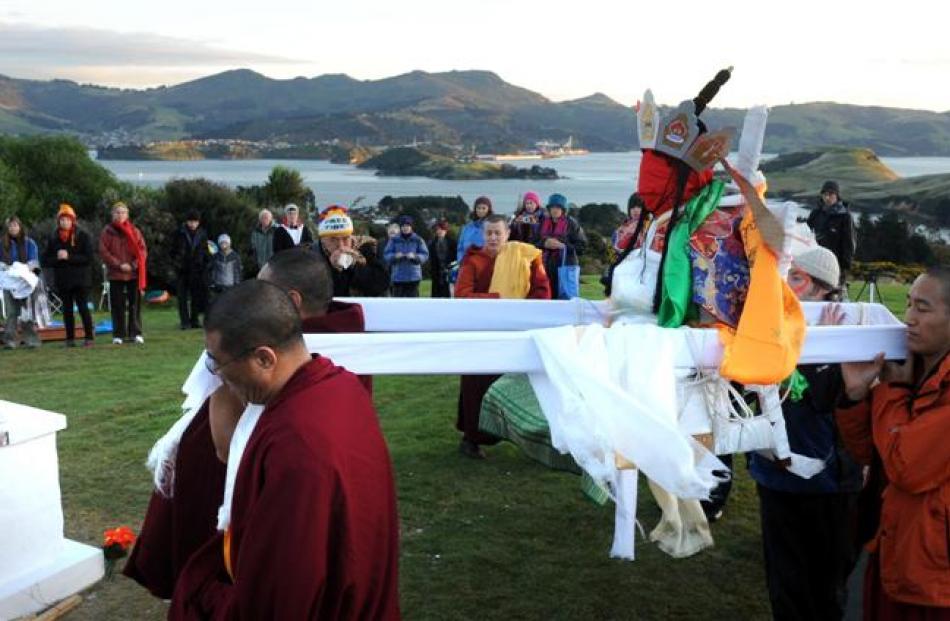 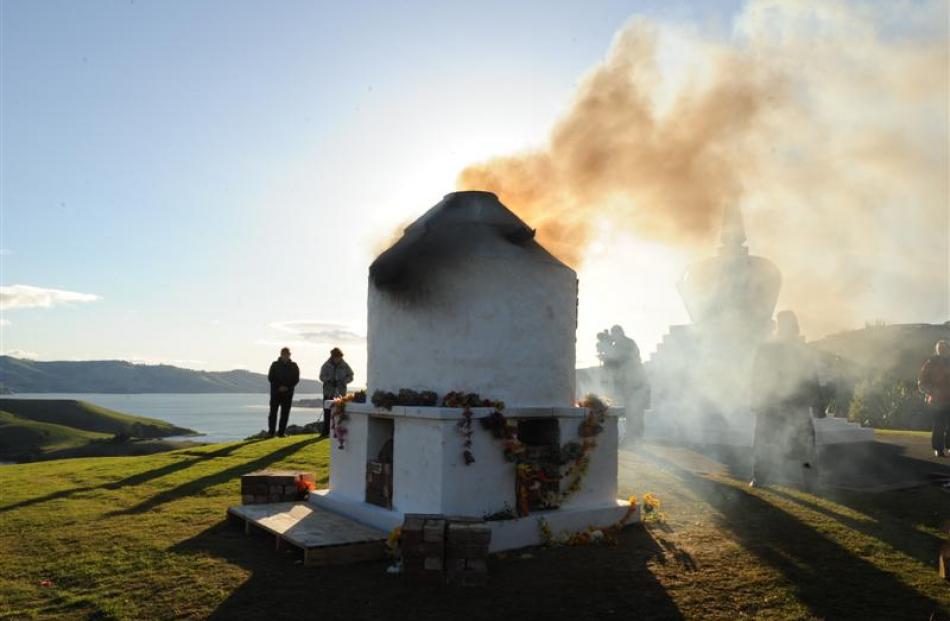 Smoke rises from the stupa. Photos by Stephen Jaquiery.

A sacred ceremony greeted the new dawn in Dunedin yesterday.

As the sun rose over the Otago Peninsula, an ancient ritual was being performed on a hillside below Harbour Cone.

Venerable Jampa Thupten Tulku Rinpoche was farewelled by the Buddhist community in a fire puja cremation.

The body was carried on a litter to the cremation stupa by four Buddhist monks, accompanied by a lama on a conch shell representing "the voice of dharma [truth]".

Well-wishers lined up to place white scarves around the deceased's neck, while the traditional "body house" furnace was draped in garlands of flowers.

The body was then placed inside the stupa and the entrance sealed with bricks by the monks. The garlands of flowers slowly fell from the stupa as the fire took hold.

Symbolic offerings of melted butter, rice, black sesame seeds and dried grasses were blessed and added as the pyre burned.

"He devoted his life to serving the people. It's a fitting honour to be cremated like that and it's only for really great lamas. I don't think anyone else has done it in New Zealand. It's only been done once in our community before, when our founder died."

It was the first fire puga ceremony since Dhargyey Buddhist Centre founder Geshe Dhargyey was cremated in the same place, in 1995.

"His Holiness [the Dalai Lama] was interested in making this unusual death process visible and having some publicity, because it's very rare in the West," Mr Small said.

Venerable Thupten Tulku had lain in state since his death on May 24, while his spirit left his body.

"It's an exceptionally long time for a lama to stay in death meditation. His passing displayed his complete mastery of Buddhism. He maintained his mind within his body for 18 days after being certified as medically dead. The most obvious signs being the body colour and skin tone remaining unchanged and lack of general decomposition. In the Buddhist world this is a very rare phenomenon.

"It's a sign of great spiritual attainment. The body doesn't decompose, because the mind is still in the body. It's one of the signs he's doing it. After a while, there are signs of decay and so the lamas know he's gone."

"I am personally very grateful to the health authorities for their sensitivity to our situation and our beliefs. They have balanced the need to ensure public welfare and our own needs and somewhat contradictory beliefs," he said.

"It's great that we are able to offer the full, traditional honours to the body of our dearly-departed lama."

"In this instance, there are no public health issues that we were concerned about."