On budget, although not on time 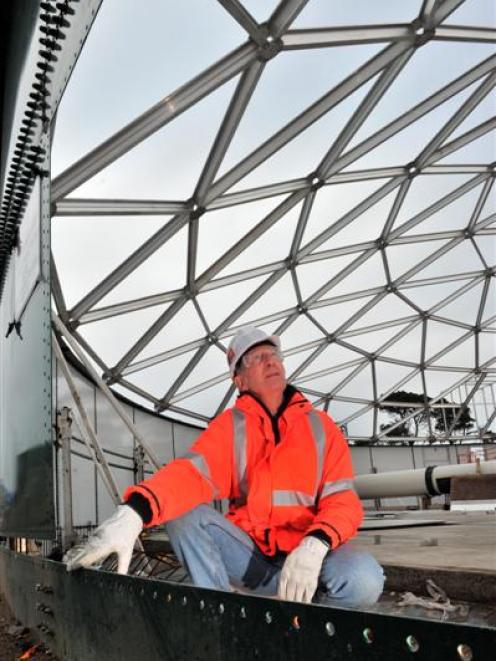 The manager of the Dunedin City Council's Tahuna wastewater treatment plant upgrade, Brian Turner, checks progress on one of two biological trickling filters that will be part of the secondary treatment process at the upgraded plant. Photo by Gerard O'Brien.
The upgrade of Dunedin's wastewater treatment plant at Tahuna may be running behind the original schedule by a few months, but it will be delivered on budget, city councillors were told yesterday.

City councillors were updated yesterday on progress on the $77 million second stage of the upgrade, which is due to be completed in September.

The filters' tanks are 37m in diameter and 12m high at the centre of their domed roofs, and their complex construction is part of the reason the project is taking longer than expected to complete, council water and waste services staff said in a report noted by the members of the council's infrastructure services committee yesterday.

Wastewater would be be disinfected by ultraviolet light and a disinfection building and installation of UV lamps and associated equipment had been completed, the report said.

Primary screening equipment at Musselburgh would be relocated to Tahuna by July and additional odour control facilities would be complete by September.

The project was originally meant to be completed by this month, but was delayed for several reasons, including the late awarding of the tender to UGL Ltd, contractor recruitment and retention difficulties and difficulty obtaining local subcontractors to undertake work at various tendered rates.

It appeared UGL's construction timeframe had been "overly optimistic", the report said.

Other tenderers had estimated construction would take five to six months longer.

Some specific contributors to the delay were the installation and removal of sheet piling in the sandy soil on site taking longer and various welding requirements being more complex and time-consuming than UGL anticipated; and construction of the biological trickling filters being more complicated than anticipated.

Despite the delays, the project was still expected to be delivered within budget, although the delayed construction meant some of the budget was carried over to the next financial year.