Builders divided on idea they self-certify 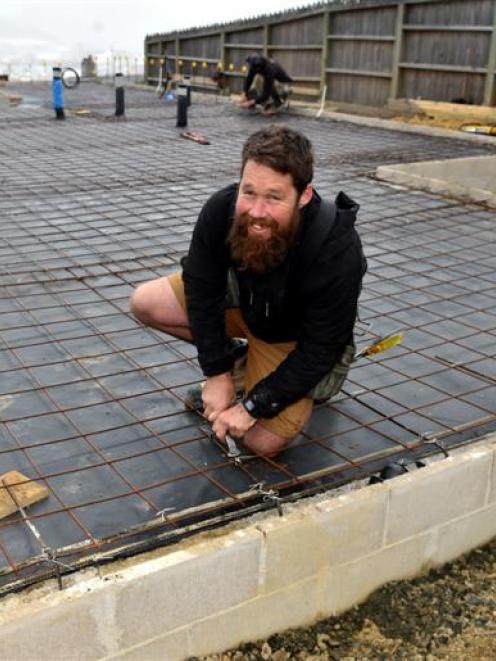 Caldwell Builders owner Paul Caldwell at a building site on Stuart St, Dunedin. Photo by Peter McIntosh.
A government proposal to have builders self certify their own work has drawn reactions from Dunedin builders as diverse as a pile of wooden off cuts.

Building and Housing Minister Nick Smith has asked his officials to consider expanding the present list of exemptions for gaining building consents, in a bid to allow licensed building practitioners to self certify certain types of building work.

The Dunedin City Council is open to the idea, but has warned a lot more work is needed on the proposal before it could be endorsed by the council.

The proposal was given a big thumbs up by most builders spoken to by the Otago Daily Times yesterday.

''The system at the moment is hopeless. I've had a new house waiting for two months to get a consent which is supposed to take 20 days.''

He said if the proposal was approved, it would save him tens of thousands of dollars each year.

''It's all the dead time we've got waiting around for consents. You can't plan ahead because you don't know how long it will take the council to do the consent.

''I've got three in there at the moment and nothing's happening to them. Even getting someone over to do an inspection can take two to three days.''

Brent Lucas Builders Ltd owner Brent Lucas agreed, but only to a point.

''I think anything that isn't structural could be signed off by a licensed person.''

Any structural supports like walls, beams and roofs that could endanger the safety of people still needed to be signed off by the council, he believed.

Caldwell Builders owner Paul Caldwell did not like the proposal.

''As far as inspections go, it's nice to have a second opinion. It gives you peace of mind. There's a lot of product, a lot of stuff that you've got to know, and it is easy to miss out little bits and pieces - not to understand something 100% - and having that second opinion is good.''

DCC building services manager Neil McLeod said he was open to the suggestion, but it needed to be very carefully considered, to avoid ''unintended consequences''.

He said there was already a large volume of work that could be carried out without a building consent, like building decks less than 1.5m above the ground, and he believed that could be extended to building the likes of engineered garages.

''But there's a number of issues that would need to be resolved, should this proposal go ahead _ things like insurance: who provides the insurance for the consumer if something were to go wrong?''He also questioned whether it was appropriate to have the person doing the work, certifying the work.

''If you were a self certifying builder, there would be enormous pressure on you to take shortcuts.

''Certainly, we [the DCC] like to think we cull out the majority of cowboy builders.

''Some builders are a lot better than others. It's like everything in life _ there's a whole range of skill sets and abilities across the industry, and for some builders and some classes of work, it may be a good idea.

''I'm also sure that for some other classes of work, it may not be a good idea.''

Registered Master Builders' Association chief executive Dave Kelly said he was interested in discussing what sort of work would be appropriate for sign off, and what sort of qualifications the people who were signing it off would need.

He believed those signing off would need to have a higher level of qualification than those held by present licensed building practitioners.

''We do have to recognise that at the moment the whole of the building industry is not ready for this. Some people are, but there is a lot that are not.''

The investigations unit was set up to curb the epidemic of shoddy building practices in Auckland.

''When the council is failing 25% to 40% of building consents because of issues around quality, it is just crazy that the Government is allowing builders to sign off their own work.''

Dr Smith said he intended to take due time and care to consider any changes to regulations in this area, including an independent audit system to ensure any changes allowing a greater range of self certified work still maintained the necessary quality of building work while improving efficiency and reducing excessive compliance costs.