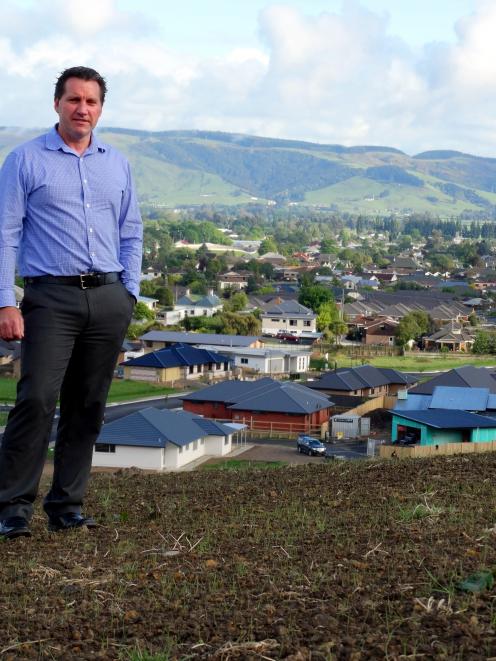 Paterson Pitts director Leon Hallett stands on the new Heathfield subdivision in Mosgiel. Photo by Dan Hutchinson
Dunedin is experiencing the biggest new-house building boom since the beginning of the global financial crisis. Star Reporter Dan Hutchinson takes a look at a city in the middle of an upgrade.

Consent work was being sent to other local authorities to process - mostly to the Invercargill City Council.

Building activity has boosted the number of people employed in the construction industry to an all-time high of 3590, based on figures provided by Statistics New Zealand.

Most new dwellings were being built in places like Mosgiel and Abbotsford where there was plenty of spare land, Mr McLeod said.

There had been some significant developments for Dunedin processed this year, including the former Montecillo Home site in Mornington and a lot of consents granted for alterations.

''We are finding that there are a lot of alterations to existing buildings going on ... and some of those can be quite large alterations.

''Land in the more desirable suburbs usually has a house on it and usually the house is just a bit too good to knock down.''

Kurt Bowen, director of surveying and development company Paterson Pitts Group, said developers were developing their sections as the market demanded them.

They were near completion of the 170-section Grandvista Estate in Abbotsford and were about to move to the second stage of a 120-section development off Gladstone Rd in Mosgiel.

He was ''not entirely certain'' where the demand for new houses was coming from, given Dunedin's modest population growth, but buyers tended to be older people or mature families looking to upgrade.

Grandvista properties had sold ''probably quicker than anyone anticipated''.

GJ Gardner Otago owner Laurie Mains said the firm had been building a steady number of houses over the last two or three years - about three a month. About one-third of those were in the main part of Dunedin, in new subdivisions in St Clair, Corstorphine and Highcliff, but also in established areas.

''There is a little bit [of building] where older houses are coming down. It is inevitable with the age of Dunedin that is going to happen more and more over the next few years,'' Mr Mains said.

He was ''very happy'' with the speed with which building consents were being processed after problems earlier this year led to a meeting between builders and the council.

Builder Kyle Pomeroy said he had enough renovation work to keep him going until March next year and building activity seemed to have picked up a lot in the last six months.

''Unless you are building out in Mosgiel, the majority of the work is renovation work really. Right now, there seems to be a pickup in inquiries.

''It is a hell of a lot better than it was six months ago.''

He had had to go to Christchurch for three months during winter last year to keep himself busy.