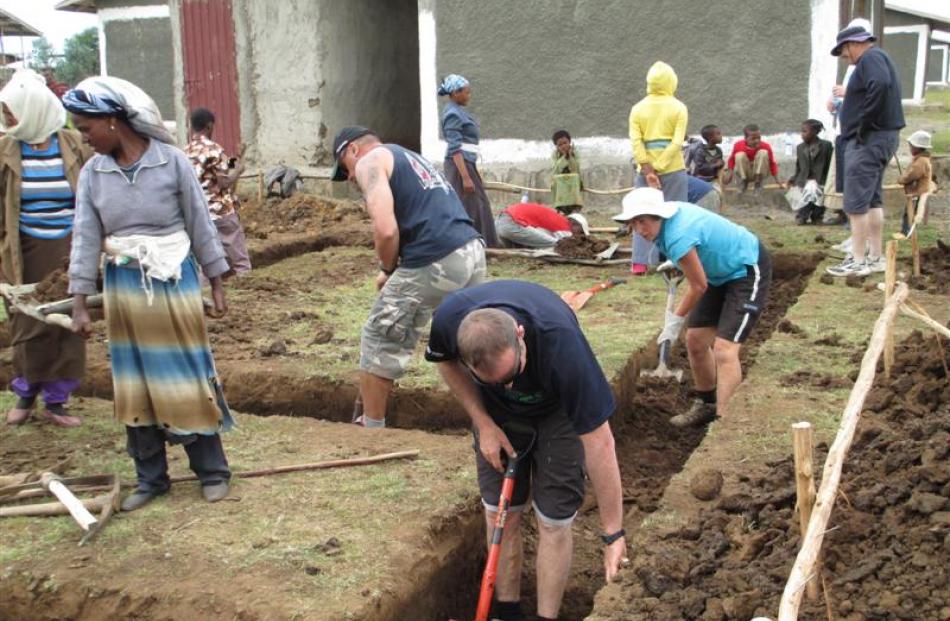 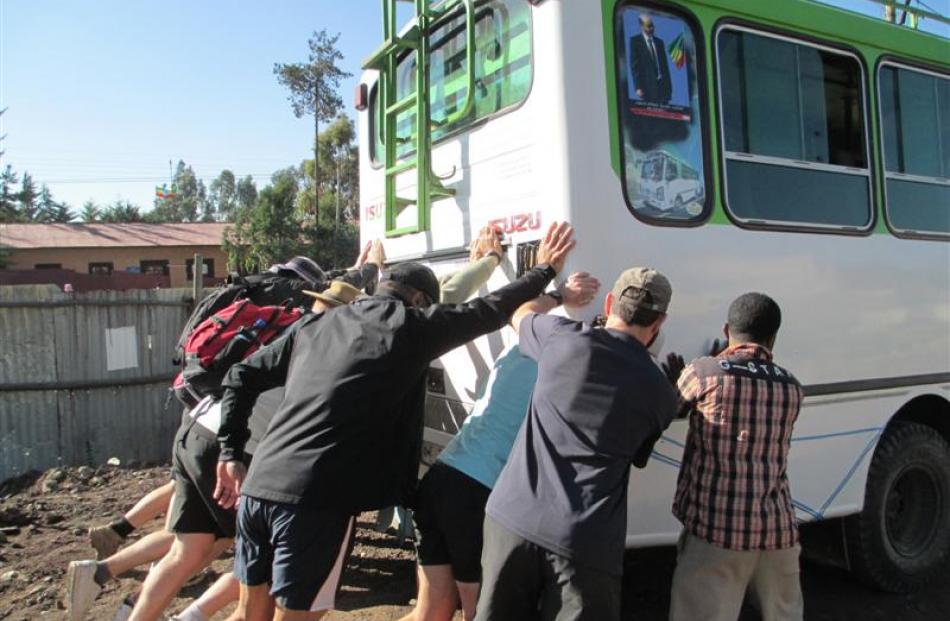 A good warm-up to begin the day - starting our bus. 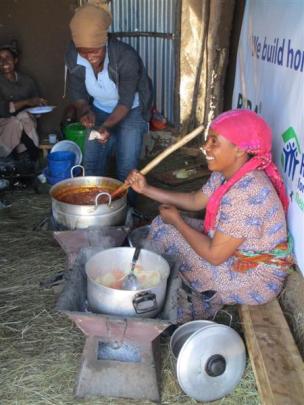 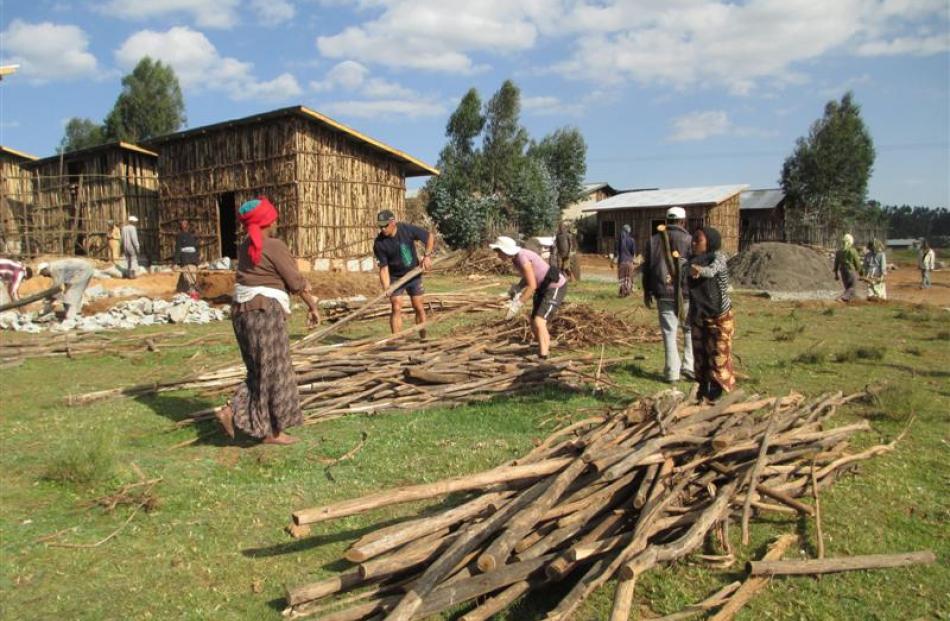 All hands to tidying up the work site. 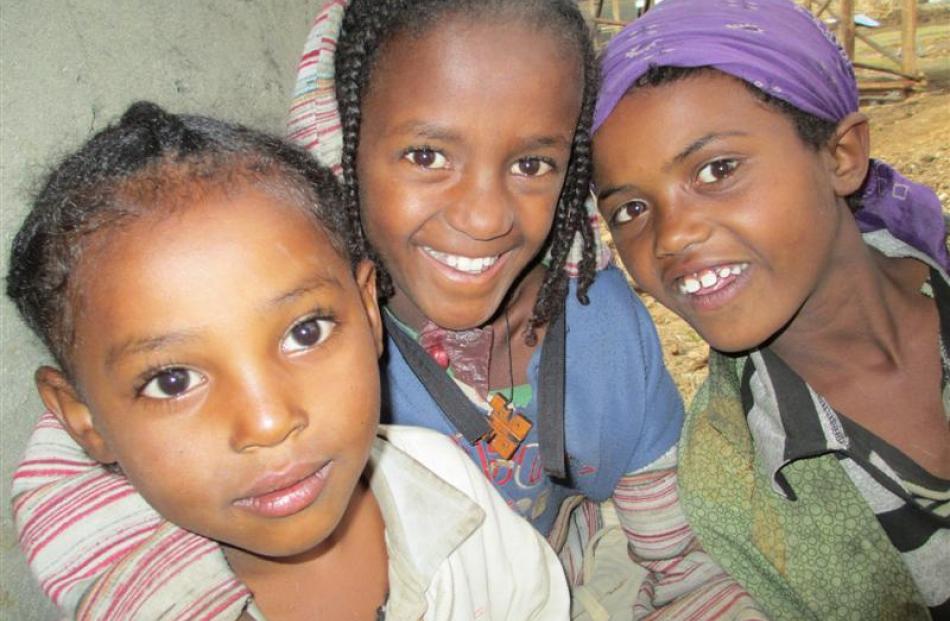 Children on the build. 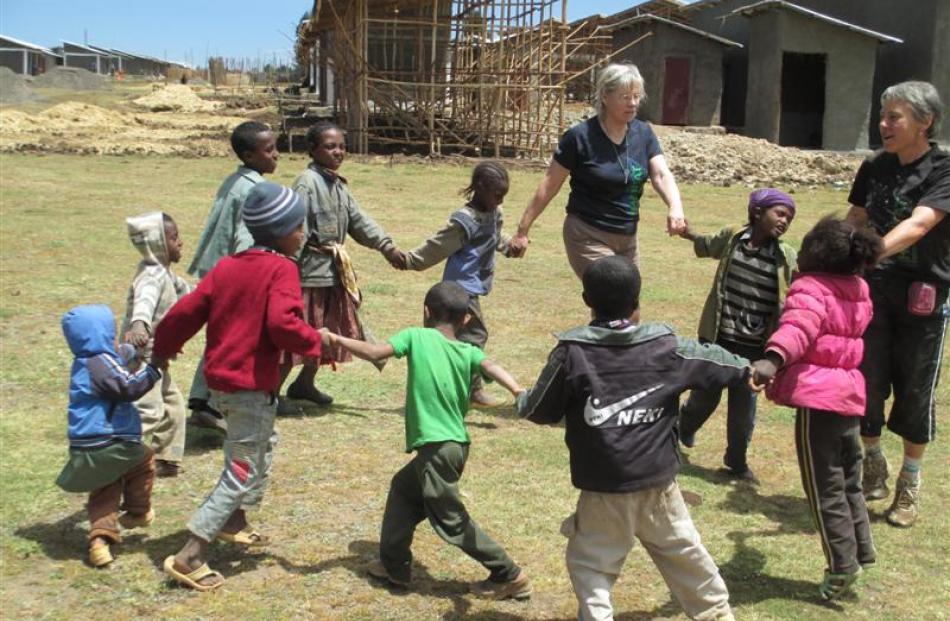 Dunedin woman Shona Somerville travelled 14,000km to satisfy a long-held wish to do voluntary work overseas. She tells of her volunteer holiday in Ethiopia.

An exotic destination, a chance for service to others, pushing yourself outside your comfort zone, meeting new people. Ethiopia, here I come.

A long-time idea has been to do voluntary work overseas. When my daughter alerted me to a Habitat for Humanity three-week build in Ethiopia, I was surprised by my passionate, definitive and instant response. I was going to do this and I was going to do this on my own. Call it mid-life crisis if you will! Supportive husband said: ''Go for it''.

During October, I was one of three women in a group of 12, part of ''Team Kiwi 124'', setting off to build mud homes - adapted Ethiopian-style. Habitat for Humanity is a non-profit Christian organisation that builds affordable housing around the world, including New Zealand. Its conviction is that every man, woman and child should have a decent, safe and affordable place to live.

We were aged 17 to 70 and included a semi-retired physio, an architect, several builders, an aluminium window businessman, a CYF-sponsored youth, a manager in a sexual offenders facility in Australia, an occupational therapist (me) and a couple in their late 50s having a year out to reprioritise their lives. Several had been before.

Fitness varied and people worked to their own capacity. We were accompanied by Kassahun Berkele, a civil engineer and project manager with Habitat, who translated and explained the culture to us, as well as by the driver of our small bus and his assistant. English was reasonably well understood.

It was a moving experience to be welcomed on site at the beginning of our nine days working on the ''build'' in Debre Berhan, three hours' drive north of Addis Ababa. Coincidentally, it was World Habitat Day and our fellow ''habisher'' (native) workers and future Habitat homeowners were there.

Both men and women put in about 500 hours of ''sweat equity'' to offset a non-interest mortgage they get from Habitat. By working on the build, people gain skills, and some go on to be employed by Habitat as ''specialists''.

''Many homes, one community'' is the motto. We certainly felt that our little labour contribution did make a difference and was valued, especially as our team (and there were many from all over the world) had travelled the furthest to get there.

New Zealanders have a reputation here for being hard workers. Our build was in a semi-rural subdivision on the outskirts of Debre Berhan, once wasteland: a mixture of Habitat and private homes. Only the primary roads were sealed in this town, so the road down to the build was rocky and the bus crawled along.

Most people walk. Donkeys and horse-drawn carts were common. Cars were few.

We were on site and working at 8.45am and worked until 4.30pm. We each put in one meal allowance (about $7) a day for the local women to cook us a main meal. This was enough to feed the other workers too.

It was hard manual labour building what, in total, was about four two-roomed houses - digging foundations, helping to frame up, lashing split timber to the corrugated-iron roofed framework, chikkaing (plastering a mud and straw brew) inside and out and compacting soil inside to build up the floor level.

The guys concreted the floor of several latrines. People squat on these, and with only a small hole, we soon discovered your aim has to be good. A stick usually aids the disposal of overshoots.

Because there is no toilet paper or hand-washing facilities, it's good to always have toilet paper and hand sanitiser handy.

Tools were simple and processes labour-intensive. Initially, until we were work-hardened, our muscles were screaming by the end of the day - muscles for Africa, literally! I loved being the chikka-chucking chick at the end of the line, hurling the chikka pad to the waiting plasterer, who was sometimes as high as 4m up a ladder.

There was a certain pleasure in aiming exactly right so that the plasterer just had to lean out to guide the airborne chikka and slap it forcefully on to the wall. With a good supply chain, we easily developed a nice rhythm. One plasterer used to joke ''come on, come on'' and I took up the challenge. It was some pace we reached, and a relief when the working day finally ended. A special moment was when he thanked me (the only word I understood!).

Plastic conduit is threaded into the chikka walls for connecting electricity at some future stage. Dried chikka walls, inside and out, receive a finer coat of chikka. The last outside layer is a fine-cement plaster. In time, owners will lime wash these in colours of their choice.

As we worked, we picked up a few Amharic words: amasagnalahu - thank you; babqat - enough; salem - hello. Our fumbling language attempts were often met with indulgent but kindly smiles and patient repetitions. We were often a source of amusement no matter what we did.

Every three days, we had a welcome afternoon off but tended to have something to do. We were privileged to be invited into the homes of two families awaiting a Habitat house. One was an ex-leprosy sufferer and his family who, as a ''vulnerable group'', had been selected for a free house with a concrete floor. The other was a family from a ''conventional group'' (low income) who make the usual labour and mortgage contribution. Both lived in one-room rented properties, with multiple families sharing basic cooking and toileting facilities, if any.

On our final day, there were speeches, gift-giving, singing and energetic African dancing, which we attempted to join in. We had something special for them - after choir practice every night for the last week, we sang Pokarekare ana.

The guys' haka caused much merriment to those not used to public displays of bare male chests. Kassahun had taught us a song in Amharic: ''Let's praise, let's praise our Lord who gives many favours.''

It certainly sums up the whole experience of this trip for me.

Some special hugs all around and our job is done.

Special memories from the ''build'' were: the quiet peacefulness, except for the delightful noise of local chatter, occasional singing and the sounds of work - nothing mechanical; sheep, goats, cows, donkeys and oxen herded past on their way to grazing, with children often playing among them; the camaraderie and relationships with locals, despite the language barriers; having the opportunity to experience something of the Ethiopian culture; and, of course, the children, who would all rush to say hello and shake our hands wherever we went.

I feel hugely privileged to have had the opportunity to work with those who would inhabit the houses we helped to build, and thankful to Steve Calley and Paul Graham, our leader and co-leader, who wanted so much to share their love of Ethiopia and its people. Days offOn our one Sunday off, we rode a slow bus along rocky roads to a monastery built into a cliff.

This outing included 30 minutes feeling our way in bare feet in the dark with a group of Ethiopians through an ascending winding tunnel. The traditional religious singing as we gathered in the chamber at the end was a powerful conclusion to a challenging experience.

We spent three days in Lalibela, in the Highlands. The town is famous for its 13 12th-century monolithic churches carved out below ground level. Ethiopia was the first nation in the world to adopt Christianity as its national religion, in AD330. Each church and its environs represents an aspect of the New Jerusalem and thus a spiritual journey. Incidentally, the Queen of Sheba, of the Old Testament, came from Ethiopia and apparently people are still searching for her gold.

Ethiopia is high in altitude, mountainous, green and beautiful. While in Lalibela, we climbed a rocky but well travelled path to spend the night at a stone lodge on a table-top mountain at 3300m. Our three-hour endurance effort can be completed by an unburdened and acclimatised local in 45 minutes. It was only foot, donkey and horse traffic up here. We arrived in time to put on all our warm clothes, as the temperature drops markedly once the sun sets. There was no electricity.

Part of dinner was a goat tethered at the back door, which I was pleased I had not noted. Highland hospitality included food, singing, dancing and feet washing and massage. We had about six days overall in Addis Ababa over three visits. We went to Hanna's orphanage, where she cares for about 200 children, including some with HIV.

We also visited the fistula hospital. With limited access to medical help and with birthing difficulties, some woman are left permanently incontinent and become social outcasts. This was a clean, green and peaceful oasis, where we heard stories of women who, after a restorative operation, could return to their villages to start new lives and share with others the education in nutrition, birthing and child care they received while recovering.

Population: 84 million people. 90% live in rural areas
Life expectancy: 53 years in the cities, 48 in rural areas.
Religion: Majority Christian, one-third Muslim.
Capital: Addis Ababa, population 3 million.
Time: The Ethiopian calendar is seven to eight years behind the West's Gregorian calendar. While I was in Ethiopia, it was the second of 13 months in 2005. The day is divided into two 12-hour time cycles beginning at our 6am. This means you have to be careful about what time you are talking about.
Currency: Ethiopian birr. 1 birr = 7c.
National language: Amharic. Average wage: $NZ2 a day.
Main issues: sanitation, housing, poverty and HIV.
Main export: coffee.