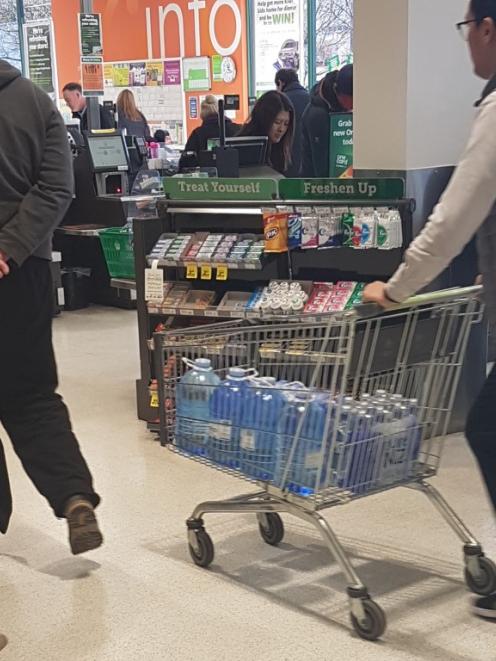 Bottled water was a popular item with Dunedin shoppers yesterday. Photo: Louise Frampton
Anything touched by tap water in the Dunedin city centre was either turned off or thrown out yesterday, creating financial woes estimated to be in the hundreds of thousands of dollars among many restaurants, cafes and bars.

Vault 21 in the Octagon was forced to close and another restaurant was forced to throw out all the food it had prepared using the contaminated water.

Craic Irish Tavern and Thistle Cafe and Bar owner Claire Grenfell said premises serving coffee or post-mix soft drinks were forced to stop serving because of their use of tap water.

''You need to boil the water for a minute to fully sterilise it.

''Of course, a coffee machine is a bit like a Zip - it just holds the water at a hot temperature, not boiling temperature.''

Nova manager Sam Vaughan said the water scare had had a significant financial impact on cafes and restaurants in the city centre.

''We should be in the middle of a busy afternoon rush at the moment, but if you have a look around, we probably only have about eight people here.

''That's down about 60 people - it's directly affecting our income.''

Otago Chamber of Commerce chief executive Dougal McGowan believed the contamination could result in the loss of hundreds of thousands of dollars of income for the industry.

He said the biggest consequence was Dunedin residents may not visit their favourite restaurant or coffee shop over the next few days because they think it will be closed.

''Businesses are still trading and this is a time when we need to support them even more.''

Mr McGowan said business owners should look at their insurance policies because their financial losses may be covered.

The Dunedin City Council was yet to consider financial support for affected businesses, but ''if people aren't insured, I expect they'll make themselves known to us,'' chief executive Dr Sue Bidrose said..

A Foodstuffs spokeswoman said its Dunedin shops were following guidance from the DCC and the company's food safety team, which had advised stores to destroy product made using fresh water since Monday morning.

Bottled water was a popular item with shoppers yesterday and additional supplies were being diverted to Dunedin, she said.