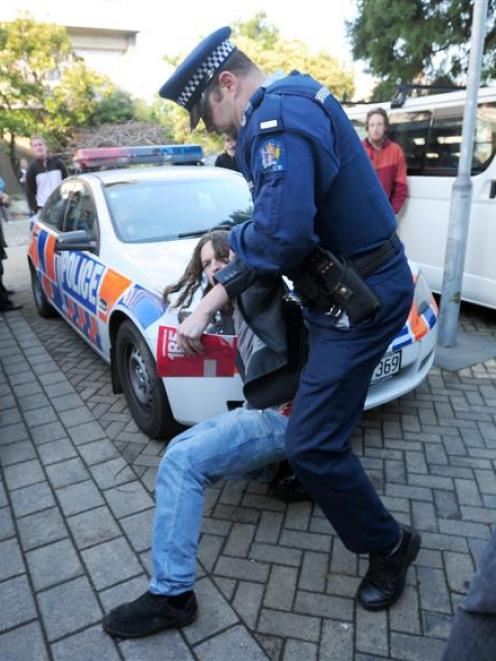 An 18-year-old student resists police.
Three students were arrested yesterday when Dunedin police swooped on a pro-marijuana stall on the University of Otago campus.

The men face charges ranging from resisting arrest to disorderly behaviour after supporters mobbed police attempting to arrest Abe Gray (26), the leader of the Otago chapter of the National Organisation for the Reform of Marijuana Laws (Norml).

Green MP Metiria Turei, who was on campus and arrived at the scene towards the end of the incident, said the police response was over the top.

Senior Sergeant Mel Aitken said police acted on information from officers at the scene that Gray was smoking marijuana at a Norml stall at a market day on the university's union lawn.

Police also received a complaint from the university proctor's office.

When Gray was arrested on a charge of obstruction under the Misuse of Drugs Act, he called out for help and about 40 people began jostling and yelling at the officers.

Gray, who gave his name to the Otago Daily Times, was later charged with resisting arrest, possessing cannabis, possessing utensils for smoking cannabis and obstruction.

A second man, a 24-year-old student, was arrested after he allegedly tried to free Gray and then ran over the roof of a police car.

He was later charged with obstruction, resisting police and disorderly behaviour.

An 18-year-old student, who allegedly refused to move after sitting down in front of a police car, was arrested and later charged with obstruction, resisting police and possessing a cannabis pipe.

All three were bailed last night to appear in the Dunedin District Court next week.

University chief operating officer John Patrick confirmed two complaints had been received by the proctor's office from members of the public about people at the stall smoking marijuana.

The complaints were referred to police.

Further comment was "inappropriate" as the matter was in police hands, he said.

Snr Sgt Aitken said if Gray had not called out to his friends, the situation would have remained "nice and calm", as the police had intended.

"Let's say we are fairly disappointed with their behaviour."

Up to seven police cars had attended the scene because of the potential for a mob situation, she said.

One witness said police officers dressed as university students had been hanging around the stall.

"This was a phenomenal waste of police time. It is shocking behaviour for police just at a time when confidence in police is at an all-time low."

While she had only arrived on the scene in "the last few minutes", she said Gray's treatment by police was "serious manhandling".

"It looks very much like they are picking off young men who are running a political campaign."

Another witness said the officers had not appeared heavy-handed in their treatment of those being arrested.