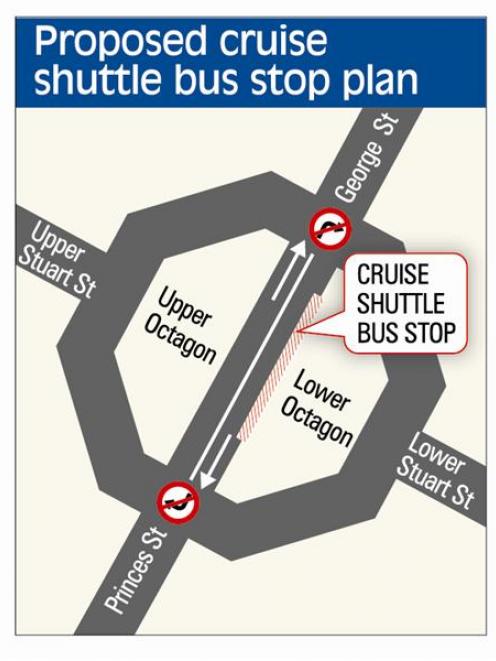 The Octagon carriageway in Dunedin will become a straight-through road over the cruise ship season if a shuttle drop-off trial goes ahead.

The proposal is to drop cruise ship passengers off on the lower Octagon side of the Octagon carriageway, in Dunedin, at a new bus stop.

Visitors have previously been dropped off on the upper Octagon side of the carriageway, requiring a mass of orange cones to be placed on the road to separate shuttle parking from traffic.

Under the proposed arrangement, right-hand turn options at either end of the carriageway would be removed and the turning lanes used to expand the vehicle lane on the lower Octagon side of the carriageway, where a 50m-long bus stop for cruise shuttle buses only would be created.

Council senior traffic engineer Ron Minnema said some Octagon businesses had been canvassed and were happy with the plan, while groups such as the police, the New Zealand Transport Agency, the Otago Regional Council, taxi companies, tourism operators and nearby businesses had been asked for feedback on the proposed change.

If the feedback was largely positive, a trial of the new arrangement would begin on October 8, when the first cruise ship was expected at Port Chalmers, and stay in place until the end of the cruise ship season.

Right-hand turning had also been blocked in the old arrangement on the days ships were in, although this time the carriageway would remain straight-through for the entire cruise season, he said.

The changes would have two effects, he said: decreasing traffic through the carriageway, and increasing it around the Octagon, although the circular street had only a relatively light traffic count of about 3500 vehicle movements a day at present.

He expected that would increase by about 20% under the proposed plan, but foresaw no issues that would create.

Mr Avery said the option had several advantages, as well as removing the orange cone deployment. The lower side of the Octagon carriageway had a full canopy for shelter and a larger flat area for passengers to wait.

If the proposed change was introduced, the trial would last for the cruise ship season and be reviewed next May. During the trial, the council would monitor and assess traffic volumes and public feedback.

Cruise ship visitor numbers had almost doubled in five years to about 200,000 visitors a season and cruise ship passengers now made up 8% of the city's visitors.

''This means cruise shuttle parking, as part of looking after our visitors, has become an important issue,'' Mr Avery said.