Cheeky chat-up line does the trick 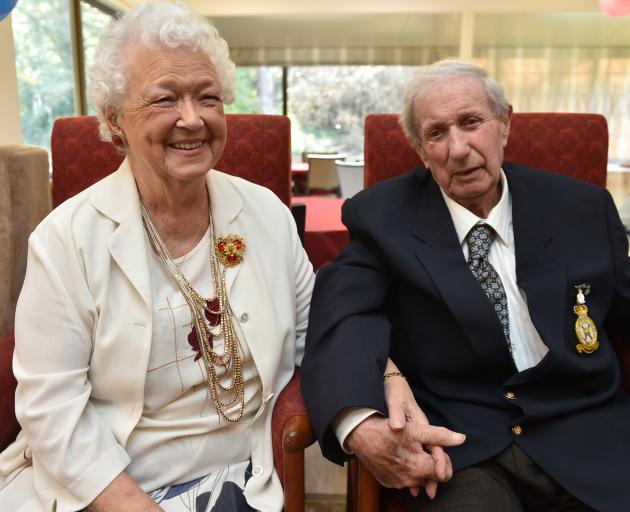 As they mark their platinum wedding anniversary, Robert (94) and Eileen (89) Rogers wonder how 70 years could have passed so quickly. Photo: Gregor Richardson
It was a cheeky chat-up line — "I haven’t any money for bus fare; can you lend me some?" — but it worked.

Robert Rogers and Eileen Duffy grew up only a couple of streets away from each other in the Liverpool suburb of Waterloo, although they had not actually met until Robert’s bus fare ploy. Now, 70 years later, the couple are celebrating their platinum wedding anniversary on the other side of the world.

They were married at St Thomas’ Church in Liverpool on July 14, 1948, soon after Mr Rogers received his discharge from the RAF. He had been a Lancaster bomber navigator and bomber in a specialist RAF division known as The Regiment.

Mrs Rogers was 19 when she and Mr Rogers married. Their first daughter, Susan, was born in 1949, and their second, Barbara, four years later. Mr Rogers worked as a factory supervisor, a job  he was well suited to because he was  good at dealing with people and defusing conflict. When he learned the factory was closing, he and his wife decided to leave England. A brother of Mrs Rogers was living in New Zealand and sponsored the family to make the move. They settled in Green Island, where husband and wife both became involved in amateur dramatics and musical productions.

Mr Rogers was employed as a supervisor at Cadbury and Mrs Rogers was for many years a secretary with New Zealand Forest Products. She was also on the Green Island Borough Council before its amalgamation with Dunedin. For the past 10 years the couple lived in Caversham. When Mr Rogers began losing his sight because of glaucoma and developed other health problems, Mrs Rogers cared for him, with community and family help. But last year, he had to go into a care facility.

"I think it’s me who needs the care," Mrs Rogers said yesterday as she held her husband’s hand.

"I really miss having him at home with me."

The couple had a celebratory afternoon tea with Bradford Manor staff and residents, including a special anniversary cake made by  staff.

Today the pair celebrate with three generations of their family: daughter Susan, several grandchildren and three of their six great-grandchildren.