Today officially heralds the start of the Christmas party season - and new dangers now lurk beyond the traditional overindulgence on alcohol and the personal safety of employees.

Poll: Should photo-taking be banned at work Christmas parties?

One issue some organisations will need to deal with is photos.

Given the growing use of smart devices such as iPhones, Windows7 and Android phones, are employees permitted to put up photos of the company Christmas party on social networking sites such as Facebook?

Many smart devices have a one-button function to take photos which automatically load to a website.

"The situation ... is about privacy and what can and cannot be done with images from a function."

Posting an image on something like Facebook meant it would probably go global and the people in the photo would lose control of that image, he said.

Employers had a duty to protect staff and protect themselves from dangerous situations at social functions.

One of the difficulties was whether staff were using company-provided smart devices or their own phones.

There was an obligation for employers to have a policy in place regarding the use of company-supplied phones, Mr Christie said.

Otago-Southland Employers Association chief executive John Scandrett said a growing number of organisations would not hold a staff function this year, to save on cost. In lieu of a function, staff would be given food parcels.

"We think 'inappropriate use' [of smart phones] could occur at any time of the year in any workplace situation and individuals should be savvy about what they may or may not do," Mr Scandrett said.

Employees had a duty of fidelity to their employer, which included not doing anything that could bring their employer into disrepute, Ms Tait, a solicitor with Gallaway Cook Allan, said. 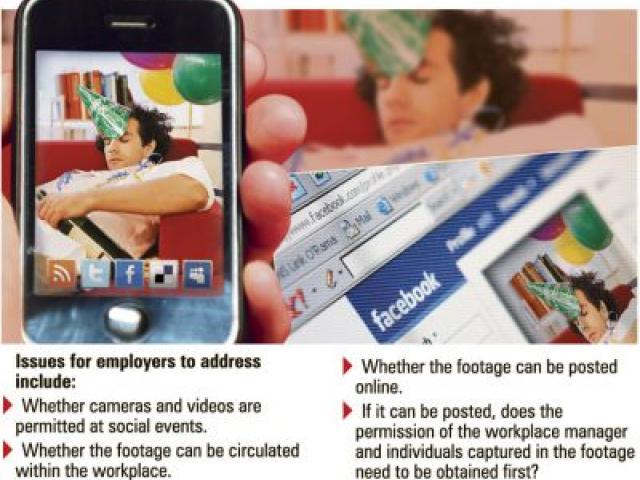