Christmas without ham looming for some 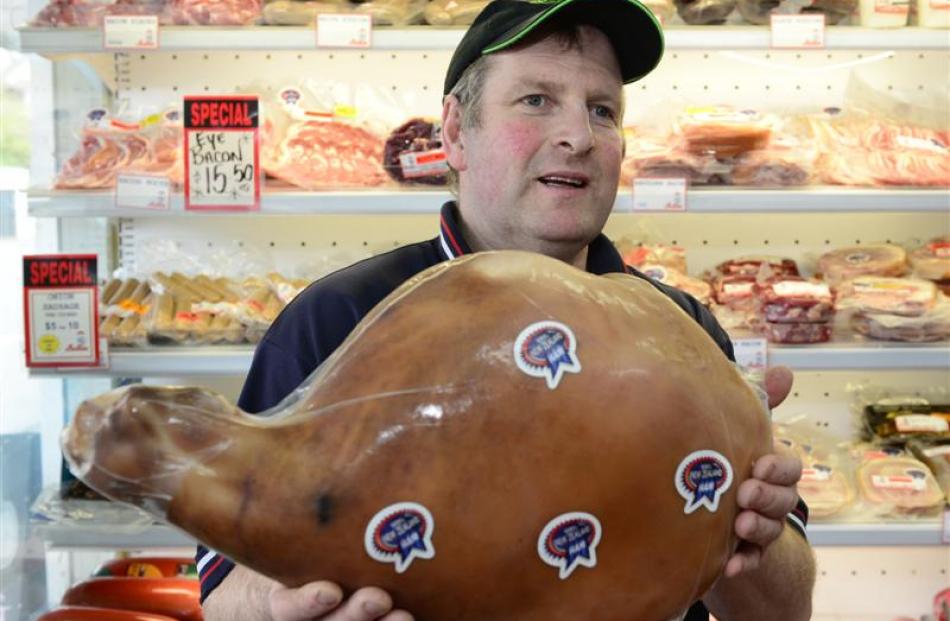 Leckies Butchery owner Grant Millar says there is plenty of pork for Christmas despite fewer pigs being farmed in New Zealand. Photo by Peter McIntosh.

Some dinner tables may go without a New Zealand ham this Christmas because fewer pigs are being farmed, New Zealand Pork chairman Ian Carter says.

About 20,000 fewer pigs were killed in New Zealand than last year and each of those pigs would have produced two hams, he said.

Consumers wanting a New Zealand ham for Christmas should buy sooner rather than later, he said.

Many pig farmers had left the industry after long periods of reduced returns because of the increase in the price of grain for feed and the strong New Zealand dollar, he said.

About 45% of the pork in the New Zealand market was imported and the strong dollar was undermining prices for New Zealand pork, he said.

Havoc Farm Pork Dunedin owner Cain Lindegreen said although the shop sold out of hams every Christmas, this year they would sell out earlier.

He expected to stop taking orders on hams some time next week.

Havoc Farm Pork owner Linda Jackson said the grain prices going up "exponentially" was just one of the reason there would being fewer hams on the market.

The new animal welfare standards, which limited the use of dry sow stalls, came into effect next month, and made many farmers leave the industry, she said.

The Government's proposed change to import health standards that would allow the import of raw, untreated pork from countries affected by the porcine reproductive and respiratory syndrome (PRRS) had many farmers exiting the industry too, she said.

"You have to be silly, just like us, to be in the business."

Kapuka Pork owner Linton Stanley said last year he had 30 free-range hams that had not sold by Christmas, but this year he had sold out of the same number of hams on Sunday.

Despite the spike in demand, this would be his last Christmas selling pork in Wyndham because he had to take a job on a dairy farm, he said.

"You can't make a living from pig farming."

The last of his breeding sows left the farm on Sunday, he said.

Leckies Butchery owner Grant Millar said he could get enough hams to meet the Christmas demand in Dunedin.

He got most of his pork from Bloems Piggery at Highcliff and despite the industry issues, like PSSR, the prices for hams had not changed, he said.