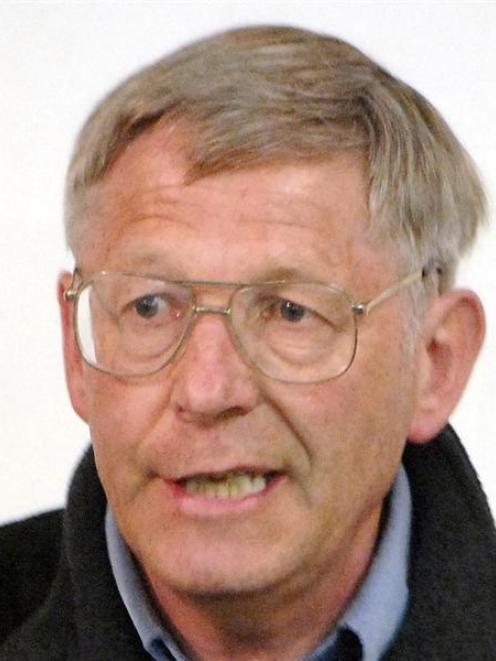 Lyndon Weggery
Dunedin Ratepayers and Householders' Association chairman Lyndon Weggery has been accused by the group's secretary of being ''the chairman of nothing''.

Association secretary Neville Poole told the Otago Daily Times yesterday the group was ''not a group anymore'' because it had failed to hold an annual meeting for more than two years.

It had also failed to file an annual financial statement with the Companies Office in that time, despite a requirement to do so each year, he said.

That meant Mr Weggery - who most recently addressed Dunedin city councillors on behalf of the association at last week's public forum - was representing only himself.

''He's running round saying he's still the chairman, but he's the chairman of nothing,'' Mr Poole said.

The failure had prompted a letter to Mr Poole from the Companies Office earlier this month, warning the association could be deregistered unless the proper paperwork was filed, he said.

He had written back to the Companies Office, advising the association was ''basically finished''.

''I couldn't fill it in [paperwork] because we hadn't had a meeting.''

A search of Companies Office records yesterday showed the association was still registered, but had not filed a return since its 2009-10 financial statement.

Companies Office staff did not respond to questions about the association yesterday.

When contacted yesterday, Mr Weggery denied he was acting as a one-man band while claiming to represent the city's ratepayers.

It was true the association had not held an annual meeting in two years, or filed returns as required, ''but we are certainly well aware we need to'', he said.

''We may have been in technical breach, but certainly functionally we are still very active,'' he said.

Asked how many members the association had, Mr Weggery said there were about seven ''very active'' executive members within a ''hard core'' of 20 to 30 members, including Mr Poole.

However, the association represented all of Dunedin's ratepayers, unless individuals wrote to the association to opt out - something that had never happened, Mr Weggery said.

The association had chosen not to hold an AGM last year, focusing instead on organising a public meeting that coincided with the council's budget hearings.

He planned to do the same this year, but would include a formal AGM as part of the proceedings and then file an annual return.

Mr Poole said yesterday the association's ageing membership had been in decline, and replacements had failed to materialise in sufficient numbers.

He believed an enthusiastic organiser like former chairman Syd Adie was needed.

''He was an organiser, he was everything ... ''Syd had everything under control.''

Mr Adie resigned as chairman in 2009 and was replaced at an AGM later that year by Mr Weggery, amid signs of tension within the association over its future direction.

Mr Poole had been a member for more than a decade, but said yesterday he would have nothing more to do with the association.

However, if the association's days were numbered, it could yet be replaced by a new group.

Calton Hill resident Dennis Dorney told the ODT he was planning a public meeting next Tuesday to discuss a move to ''resuscitate'' a ratepayers association.

The meeting would be held at the Dunedin Community House at 7pm, he said.