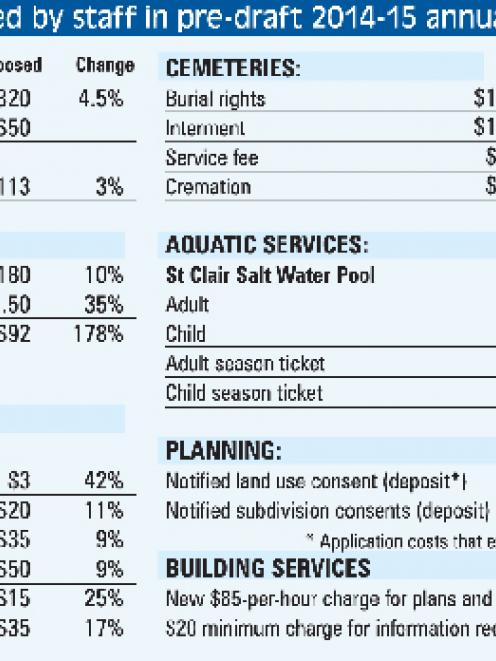 Multiple departments of the Dunedin City Council are seeking councillor approval to increase some of their fees and charges from July 1 - including potentially more increases in landfill fees.

If the present draft annual plan is signed off by councillors in May, residents of Dunedin will be looking at an increase in the cost of, among other things, dying, displaying their goods on the footpath, parking outside their inner-city homes, using the city's landfills and sports grounds.

The cost of registering dogs will stay the same, as will being a member of a library, parking tickets, and going for a swim at Moana Pool - although a swim will cost slightly more at the St Clair Salt Water Pool.

Recent hikes in the council-owned landfill fees have been criticised by residents and the council has asked for a report on a weigh bridge at Green Island. A weigh bridge would mean people were charged by the weight of their waste, rather than the size of the vehicle they brought it in.

Council staff have indicated they could have the weigh bridge installed by July.

If the council decides not to go with that option and stick with its present regime, fees will rise more - the cost of dumping a single black bag will go up from $2.10 to $3, a car-load will go up to $20, and a single-axle trailer-load to $50.

The fees have been increased over time since last year, to better meet the actual cost of disposing of the waste.

Burial, interment and cremation fees are again to increase next year, by about 2% across the board, compared with an increase on average of about 3% this year.

Team leader Daphne Griffen said the increases reflected increased contractor costs and an adjustment to better reflect the true cost of the loss of income from metered spaces where permits were issued.

Her team also enforced the council's commercial use of footpaths policy, under which some permitted users were about to experience a dramatic hike in annual fees.

Those increases reflected the change in the street furniture situation from that which existed in 2005 when the policy, which has been under review for 18 months, was drafted.

''Back then, there were hardly any tables and chairs on paths, or goods displayed in the streets. Now they are everywhere.''

The policy was taking her staff a lot of time to enforce and the increases also reflected that, she said.

The fee changes will be part of the draft annual plan, which people can have their say on through the submission process between March 15 and April 15.