As the sun set, members of Dunedin's Muslim community knelt in silent worship, surrounded by the flickering candles of a city united in support.

This time, their prayers were not shattered by hatred or violence. 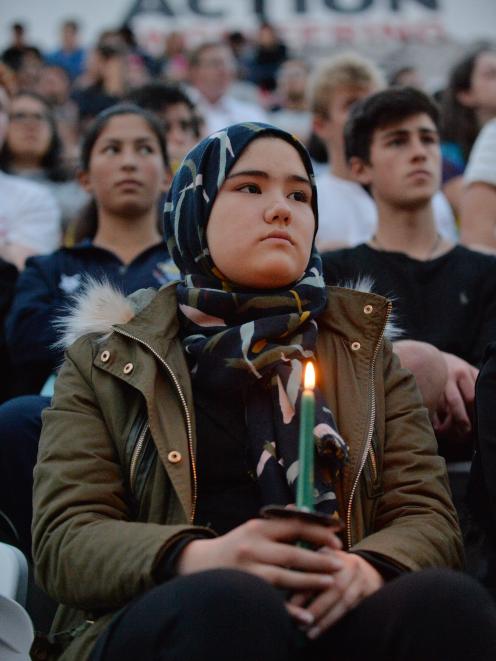 A woman holds a candle in the crowd during last night's civic vigil at Forsyth Barr Stadium in Dunedin.
This time, our Muslim community was with friends.

They were part of us.

A crowd of about 18,000 spread out across the stadium's pitch and filled the Mitre 10 stand for Dunedin's civic vigil.

Before 50 candles were lit for the victims of last week's Christchurch massacre, Mayor Dave Cull urged the crowd to forget the perpetrator and his "poisonous beliefs".

Instead, they should focus on their aroha, care and concern for Dunedin's Muslim community, and "face down" even casual expressions of racism, mistrust and ignorance.

"We need to be examples of inclusion for our children. They are not born prejudiced. They learn that from us.

"Reach out, one way or another, and give your neighbour a hug - especially if they are different from you."

It was a sentiment echoed by Otago Muslim Association chairman Mohammed Rizwan as he thanked the crowd - and the city - for its support.

It was hard to comprehend the "tragic" events in Christchurch, not because such terror was new, but "because of how much of ourselves we can see in the people whose lives were taken from us".

"They were someone's loved one, someone's family - our family."

The perpetrator had hoped to terrorise the community and the world "but he failed".

"He failed because he chose us ... because we gather here tonight united as one whanau," he said, as the crowd applauded. 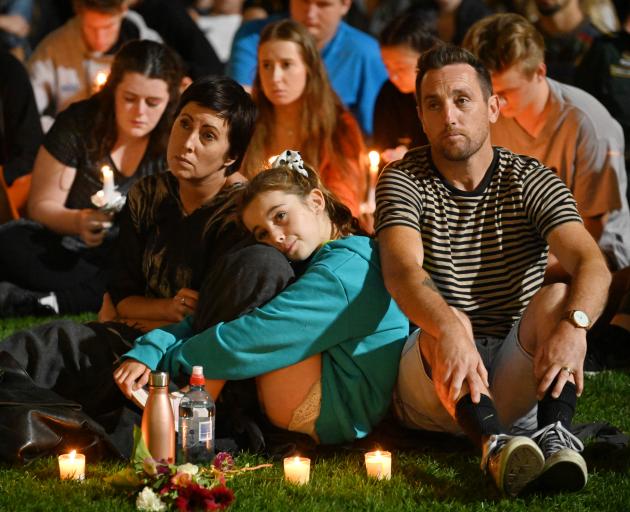 A family burns candles as they listen to the calls for unity, tolerance and respect at last night's civic vigil.
We all needed to be better, as people and a community, but out of such tragedy had come courage, strength and unity.

"With so much love from you, so much aroha, each day there's a little less darkness," he said.

The stadium vigil was organised by the Dunedin City Council and Otago University Amnesty International Group.

Before it began, more than 10,000 students and staff sent a powerful message of solidarity as they walked in spine-tingling silence from the University of Otago to the stadium.

As they passed by, other members of the public - including members of the Muslim community - watched from the footpath, soaking up the unspoken message of support.

Among the marchers was Heather Lundbeck (29), a dentist at the faculty of dentistry, who said she wanted to show the city's Muslim community there was "no time for hate".

So, too, did Sunethra Tennekoon, another dentist from the university's dental school, who said she was there partly to support her friend, who lost a brother in the Christchurch attacks. 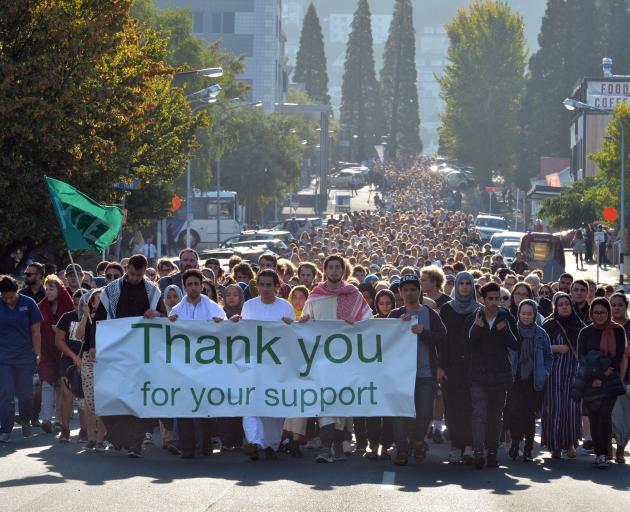 More than 10,000 students and staff, led by members of the Muslim community, march in silence from the University of Otago down Union St East towards Forsyth Barr Stadium yesterday.
Yesterday's vigil was about solidarity with victims, their families and the wider community.

"I think that's what this shows," she said.

The stadium vigil also included a karakia by Matapura Ellison, of Ngai Tahu, a waiata, prayers by other religious representatives and performances by the Otepoti Peace Choir.

The crowd left with the words of Dr Mai Tamimi, a Muslim community representative, ringing in their ears.

"There's no place for hate among us ... just love and peace."