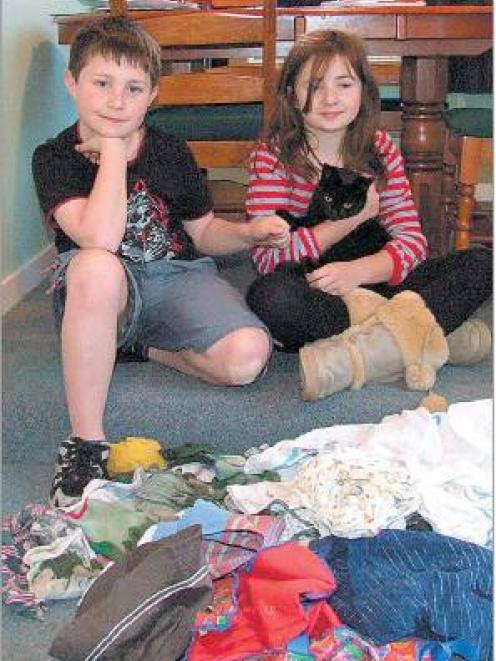 Feline thief: Jessie (9, left) and Sammy (12) Irvine with Roxy and her stolen bounty.
Green Island residents who may be wondering why their laundry has been coming in off the line a few garments shy during the past few months will be pleased to know that the culprit has been identified.

‘‘She [Roxy] has been stealing from the neighbourhood since she was seven months old,'' Mrs Irvine said.

‘‘She used to drag all sorts of things in through the cat door. But since we replaced it, she's been using a window.''

The mother of two, who moved to Green Island from Corstophine more than two years ago, said her cat's collection of pilfered goods included children's clothes, socks, hats, underwear, beach towels, tea towels, gardening gloves and even a pair of diving gloves.

‘‘I honestly don't know if she's been going into people's homes, sheds or what.

‘‘One of my neighbours said he'd seen the cat steeling rags from his yard but where the rest of it came from I just don't know.

‘‘I told the kids when I had a shopping bag full I'd call someone.''

Mrs Irvine said she would like to see the items returned to their rightful owners and anyone in the neighbourhood who was missing any articles of clothing should feel free to contact her.