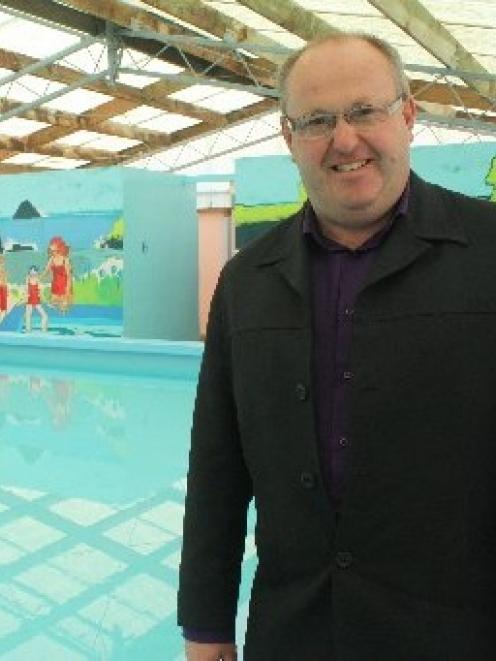 Big Rock Primary School principal David Grant says it seems frivolous for the Dunedin City Council to fund some school pools but not others, based on an agreement made in the 1950s. Photo by Tim Miller.
Each year schools with pools are struggling to find the money needed to keep them open, leading some schools to question the rationale behind the Dunedin City Council funding some school pools but not others.

The Dunedin City Council funds five school pools, all in the Dunedin city area, based on a historical agreement, and the Ministry of Education provides a small amount of funding for pool maintenance each year.

Big Rock Primary School principal David Grant approached the council when he learnt there were five schools that received funding for their pools.

It cost about $5000 to run his school's pool during the summer, which did not take into account one-off costs, such as painting, he said.

''Our pool is one of, if not the biggest, cost we have and I approached the council to see if we were missing out on some funding.''

''I don't begrudge those schools who are getting the funding but the council funding some pools and not others based on historical agreements seems frivolous,'' he said.

Fairfield School principal Andy Larson said he would like to think the council would at least review the funding situation.

''Our pool runs at a loss each year even though we have a really active parent committee trying to raise funds,'' he said.

Mr Larson said the school had talked to the council about the funding when it came up for review in the past but nothing had changed since then.

Macandrew Bay School board of trustees chairman Matt Harcombe said he was not aware of the council's funding of school pools.

Mr Harcombe said while he did not want the schools that already received funding to be suddenly left short, it would be good if the council took a look at the funding situation.

A spokeswoman for Dunedin North Intermediate said it cost about $19,000 a year to keep the pool running all year round and money from the council went towards heating and maintenance costs.

The pool was used by other schools and for private swimming lessons, she said.

The five urban schools received funding based on an agreement made in the 1950s between the council and the education department.

There had been discussions in the past about pooling all the funding together and funding all school pools from one fund, but nothing had ever come of them, Mr Prescott said.

It was not likely the council would want to fund more school pools any time soon, he said.

Aside from funding, the council supported schools with their pools in other ways, such as helping to repair equipment and to buy chlorine at a lower price, Mr Prescott said.