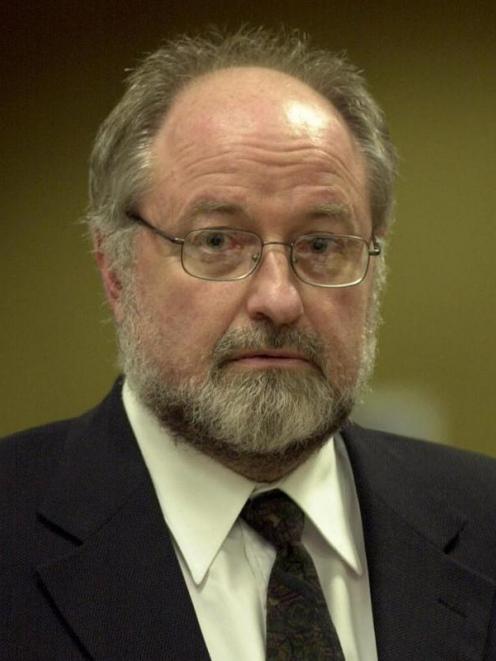 Colin Bouwer in court in 2001. Photo by ODT.
The Dunedin doctor at the centre of the Colin Bouwer poisoning case has dismissed new claims aired in a television programme.

Internal medicine specialist Dr Andrew Bowers played a pivotal role in bringing the once respected former head of psychological medicine at the Otago Medical School to justice for murdering his wife. Bouwer is eligible for parole in September, and is subject to a deportation order to South Africa.

Annette Bouwer died on January 5, 2000. Yesterday, Dr Bowers said he was in no doubt she did not have the rare autoimmune disease myasthenia gravis.

TV3's Third Degree aired a segment on Sunday claiming Mrs Bouwer had the disease, undiagnosed, and it could have accounted for symptoms attributed to poisoning.

Dr Bowers said: ''In fact, there is strong evidence to support that she did not.

Dr Bowers had insisted on a crucial postmortem that revealed the poisoning.

The programme aired a new claim from Bouwer, conveyed by a third party, that he administered the drugs because his wife wanted to commit suicide.

He did not use assisted suicide as a defence in his 2001 trial. Dr Bowers said the suicide claim was not credible.

The new claims are supported by Anthea Bouwer, who does not believe her father committed murder.

Lawyer David More, of Dunedin, said he was awaiting instructions from Bouwer about a possible Privy Council appeal based on the claims.

Mr More said Bouwer's claim he administered the prescription drugs under instruction from his wife could answer lingering questions around the case.

Mr More did not know why Bouwer did not run the assisted suicide defence in his trial.

Bouwer was sentenced to prison with 13 years' non-parole in 2001 for murder by administering prescription drugs that mimicked the symptoms of a rare tumour.

From late September 1999 until her death at the couple's St Clair Park home, Bouwer administered a fatal combination of sedatives and hypoglycaemia-inducing drugs.