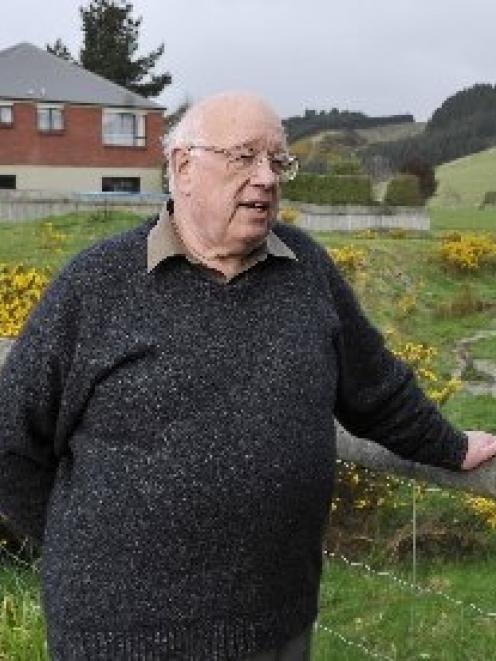 Gladstone Rd North resident Stan Rodger is opposed to a subdivision proposed for Mosgiel, which he says represents a district plan change by stealth. Photo by Gerard O'Brien.
The Dunedin City Council is passing the buck and in danger of consigning its own district plan to oblivion as it moves a step closer to approving a Mosgiel subdivision, retired MP Stan Rodger says.

"The DCC's committee says it is of a mind to allow the consent to proceed, and what that means is that the district plan is meaningless, destroyed," the former Dunedin North MP said yesterday.

"They might as well have a big bonfire in the Octagon and burn the plan altogether, for as much as it will then be worth."

The council's hearings committee has told developers Allan and Martin Dippie it is "of a mind" to grant consent to the subdivision, subject to some matters being resolved.

It asked the developers to promote the use of water-holding tanks and provide a workable solution to fund the stormwater attenuation system.

It also asked for confirmation the Otago Regional Council has no issues with the stormwater attenuation system and/or a resource consent for its stormwater discharge.

Mr Rodger, who in July told the hearings committee he was worried about run-off from the property, said that was simple "buck-passing" when the committee could have issued a blanket "no".

"Now, the Otago Regional Council will be the local authority that will have to look into the potential flooding consequences in the Owhiro Stream and Silver Stream.

The committee is asking someone else to make the hard decisions."

Allowing a subdivision where 35 of the proposed properties would be smaller than allowed in the district plan was "a plan change by stealth".

"It will be a simply weird decision and one has to ask, where does this leave the integrity of the district plan?"

Dave Johnston and Rennie Logan also made oral submissions on the resource consent but were yesterday reluctant to comment before the committee released a final decision.