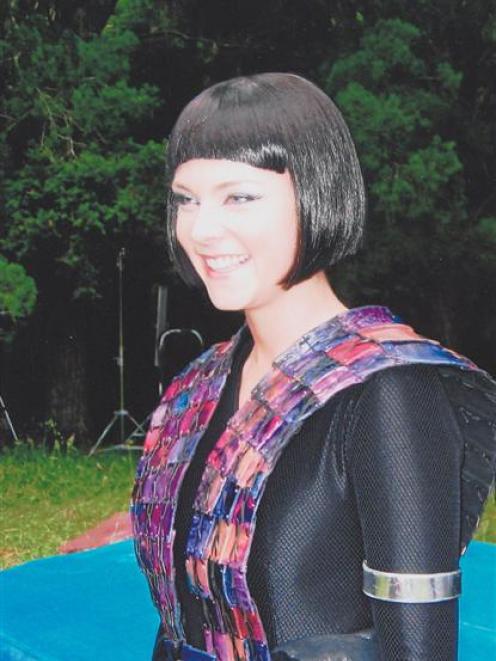 Ria Vandervis relaxes on the set of Power Rangers, the series in which she plays an evil warrior.
Playing an intergalactic ninja warrior has been Ria Vandervis' most interesting acting role to date.

Miratrix was a villainess in the Power Rangers television show, the former Columba College pupil says.

"It meant getting into crazy costumes and having crazy make-up and hairstyles done every day... I had to do a lot of martial arts-style fighting, wielding two swords, which I was trained in before filming."

Vandervis (24), was involved in the drama club at Columba but it was architecture she began studying when she left school.

A scholarship took her to Auckland University but while taking time off because of illness, she started a BA in film and media, then got into drama school.

After graduating from the School of Performing and Screen Arts with a degree in performing arts, she remained in Auckland doing acting and waitressing.

She appeared in a couple of feature films - Emeralds and The Devil Dared Me To - then landed the role in Power Rangers.

Vandervis says the series was destined for an American audience but filmed in New Zealand because of the cheap crews here.

After shooting 32 episodes over eight months, she was sent to Los Angeles for a Power Rangers convention.

"It was a pretty weird experience", she says.

One of those fans has even set up a website devoted to her.

She recently finished filming an ABC show, The Cut, in which she plays a catty but witty receptionist at a sports management office.

She says it was a privilege to be cast alongside several well-known actors, including John Wood, who played Senior Sergeant Tom Croydon in the long-running police drama Blue Heelers.

Next week, she starts filming in Sydney for a new Channel Nine series of Underbelly.

The show dramatises the "Mr Asia" drug smuggling years of the 1970s and is a prequel to the first series, based on the 1995-2004 gangland war in Melbourne.

Vandervis will play the part of a drug-trafficker.

While she would like to study acting further and eventually live in New York, Vandervis says her income fluctuates greatly and she works in restaurants to pay the bills between acting jobs.

"Often you can go months at a time without any acting work so it can be pretty soul destroying. You constantly ask yourself, 'Am I cut out for this kind of a life with all this uncertainty?'

"But then when you do get your next job, you remember why you sacrificed a normal life. As corny as it sounds, it's because you love it."