Climb in numbers of skinny seals 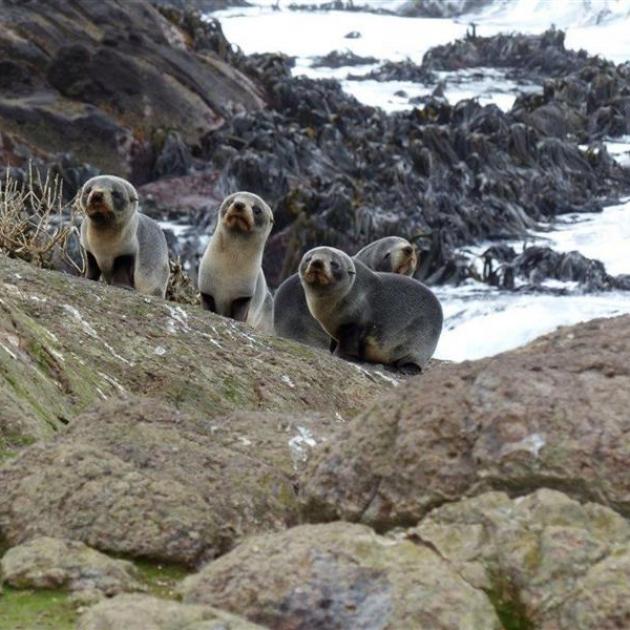 Emaciated fur seals on Green Island, off the coast of Brighton. Photo supplied

The numbers of emaciated and possibly starving fur seal pups being seen along the Otago coastline are the highest since the early 1990s, Department of Conservation rangers say.

Doc marine species and threats adviser Laura Boren said scientists had been tracking the fur seal population in Otago for many years.

''Some of what we've been seeing [this year] is not typical.

''Some of the key populations have noticed skinny pups and juveniles and high pup mortality.''

The population near Kaikoura was also regularly monitored and Doc had identified an increase in ''skinny seals in general and also increased mortality for all age ranges''.

It was unclear whether the increased mortality was a result of the seals starving to death, but Dr Boren said it was ''highly likely [that's] what it is''.

Doc staff in some other parts of New Zealand said the number of calls reporting dead seals had doubled, she said.

''But they might not all be related,'' she said.

But with ''well-established colonies monitored for a long period of time'' - such as in Otago and Kaikoura - ''you can get a better handle of what's unusual and what isn't''.

She said it was ''quite common'' for a certain number of pups to die each year. ''Starvation ... makes up a reasonable component of that first year mortality.''

Dr Boren said Doc was performing autopsies on the seal pups in the hope of discovering if they were dying of starvation, but had not reached any firm conclusions yet.

Scientists were also unsure of why the seals did not seem to be getting enough food.

''It could be a reduction in the availability of squid or other species that are part of their diet.''

It was also possible El Nino could be affecting the behaviour of fur seals' prey.

Meteorologists have said El Nino is on track to be the most significant since 1998.

''It's difficult to tease out a lot of these different things,'' Dr Boren said.

But it was important people knew fur seal pups were vulnerable and that beach-goers with dogs should take care.

''If you're walking your dogs, please keep them on a lead,'' she said.

''There are going to be a lot of pups and juvenile seals on the beaches, and some of them won't be in the best of conditions.''