Cohousing life about to begin in High St development 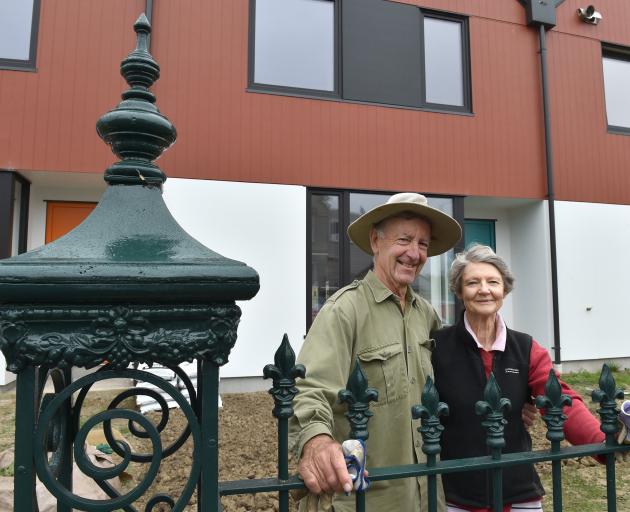 Sandy and Frances Ross are gearing up to move into their unit at Dunedin’s Toi Ora High Street Cohousing development. PHOTO: GREGOR RICHARDSON
A jungle-like garden at their home of 37 years was the final straw for Frances and Sandy Ross.

Five years later they are about to move into a new co-housing development in central Dunedin.

Building has finished on the 24-unit Toi Ora High Street Cohousing development, and with just a few pieces of paperwork still to be signed off, residents are expected to start moving in within a couple of weeks.

The development started to take shape in 2013, when Urban Cohousing bought the former school site to create an inter-generational cohousing neighbourhood.

Mr and Mrs Ross were busy gardening in front of their unit yesterday, getting it ready before they move house.

The pair had lived in their Roslyn home for 37 years. They also have a holiday home in Waitati, where they spend their summers.

It was at the end of summer in 2016 when, upon returning to find their garden resembled a jungle, the pair decided to look at cohousing.

They attended an induction meeting in April 2016, and by the end of it they were thinking "this is for us", Mrs Ross said.

"The community, the people were the most attractive part of this sort of thing," Mr Ross said.

Future residents had been having weekly catch-ups for the past four years, so most of them already knew each other well.

The development would also be something of a family affair — one of their children, and two grandchildren, were also moving into a unit.

The development was designed by Dunedin architecture firm Architype.

Director Tim Ross said it had been hoped builders would have finished by December 2020, and they pretty much were, but there were a few little things that had needed to be finished.

"It will be really interesting to see, once it’s actually alive, how it all works and the opportunities for people to work together on different projects and share things."