Community has outgrown its mosque 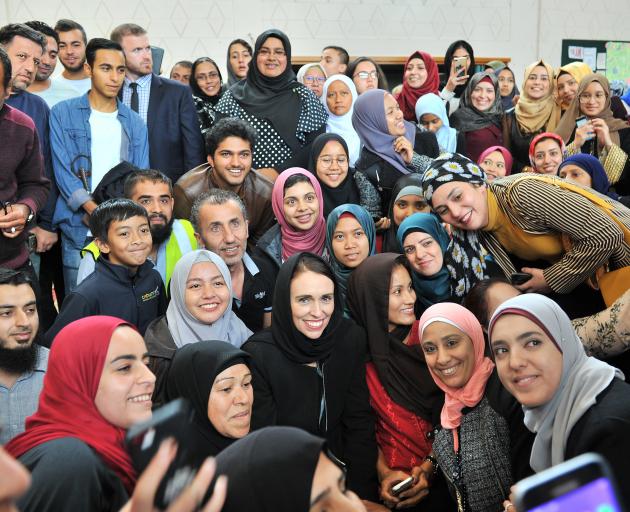 Prime Minister Jacinda Ardern poses for photographs with Dunedin Muslims inside the Al Huda mosque yesterday. Photo: Christine O'Connor
Dunedin's Muslims are outgrowing their spiritual home so are asking for help to upgrade the space inside and increase the safety of their mosque.

The Otago Muslim Association is trying to fundraise $100,000 to upgrade the Al Huda mosque in Clyde St and improve its safety following the Christchurch mosque shootings.

Established in 2000, the mosque is now too small to accommodate the growing number of Muslims living in the city and the attacks on the Al Noor mosque and Linwood Islamic Centre have highlighted existing safety concerns.

Association chairman Mohammed Rizwan said in the past week people had approached the association and asked how they could help Muslims in Dunedin.

''For 10 years we have been trying to do this without much success so, as people are reaching out to help, we decided to start this now and see what happens.''

Traditionally, the small community had been centred around the University of Otago but the arrival of more than 500 refugees from Syria, Afghanistan and Palestine meant it was now spread out through the city, Dr Rizwan said.

There were now about 750 members of the mosque which meant large gatherings had to be held elsewhere, he said.

''Unfortunately, since we've converted the building into a mosque, we haven't upgraded it. All the washing facilities and the toilet facilities need upgrading as well.''

The safety issues existed before March 14 but the attacks had highlighted the need for improvements, he said.

''At the moment we only have one entry and one exit which is not very safe and we did have a surveillance system but it was broken into and it doesn't work any more so we have to upgrade that.''

When Prime Minister Jacinda Ardern visited the mosque yesterday, Dr Rizwan told her that it would need Government support to reach its funding goals.

She told him to work through the request with local MPs.

The association has set up a fundraising page on the website Givealittle.

There had already been discussions between the association and other organisations such as the Dunedin City Council about how they could help, he said.

At this stage there were no detailed plans for the upgrade but the aim was to build another storey on top of one of the existing rooms, Dr Rizwan said.

If successful, the association's medium and long-term plan was to build more mosques in the city, he said.

Between all the members of the Mosque, I'm sure somebody would have access to a commercial kitchen where batches of Halwa could be made, refined and developed to become a unique New Zealand blend or Southern New Zealand blend and sold to fundraise for the Mosque. Go on introduce Dunedin to the unique flavours because we all know food brings us all together to enjoy the food talk share a laugh and become friends - who knows Halwa might become as famous as cheese rolls. Remember to eat in moderations I know I had to when living in the Middle East

Dcc and the government could help them upgrade the mosque but won’t help numerous churches around dunedin funding for earthquake strengthening? That is an absolute double standard. They can fund it themselves. Fair is fair.