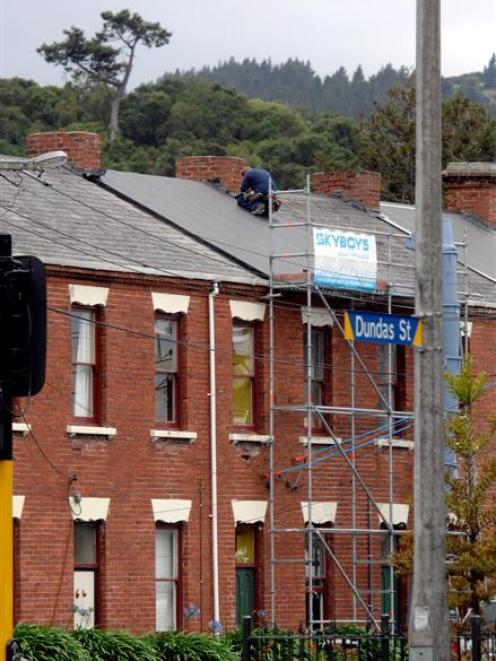 The brick building with slate tile roofing was constructed in the 1880s and was listed as a New Zealand Historic Places Trust category 2 building in 2005.

The council received three complaints from the public yesterday when it appeared builders were removing the old slate tiles from the building at 68 Dundas St and replacing them with a corrugated iron roof.

The owner of the house, All Black and Highlander lock Tom Donnelly, said the work had become necessary after the roof developed severe leaks and the tiles began to fall through the ceiling.

"Basically, the recent rain completely saturated the roof. It caved in on itself and there really wasn't much choice but to replace it.

"I just rang up a builder and told him to fix it. We've got students wanting to move in, in a couple of weeks."

A complainant, who declined to be named, was critical of the work.

"I understand you have to replace the roof if it starts leaking. But it's mindless, the way they are doing it.

"It's another piece of Dunedin heritage being altered. It detracts from the whole streetscape.

"They could have replaced it with newer tiles, rather than corrugated iron."

He said the council was investigating the work, but could not say whether resource consent had been obtained.

"We can't say anything more at this stage."

He was pleased Dunedin residents had noticed the work, but was at a loss to explain why the council had not received complaints about two other sections of the building where corrugated iron roofing had been put up recently.

New Zealand Historic Places Trust Otago Southland area manager Owen Graham said he had not been contacted by the owners of the building, or the builders.

Usually, when work was carried out on historic buildings, he was informed about the project, he said.

However, he believed as long as the tiles were not removed, and the corrugated iron was placed over the top of the tiles, the work would be acceptable.

The land on which the terrace houses were built was granted to John Hyde Harris in September 1860.

Early ownership of the land and buildings passed through the hands of Aucklander Henry Tancred, and James and Charles Allen.

In 1925, the property was subdivided into lots, and later the terrace houses were sold on individual titles.