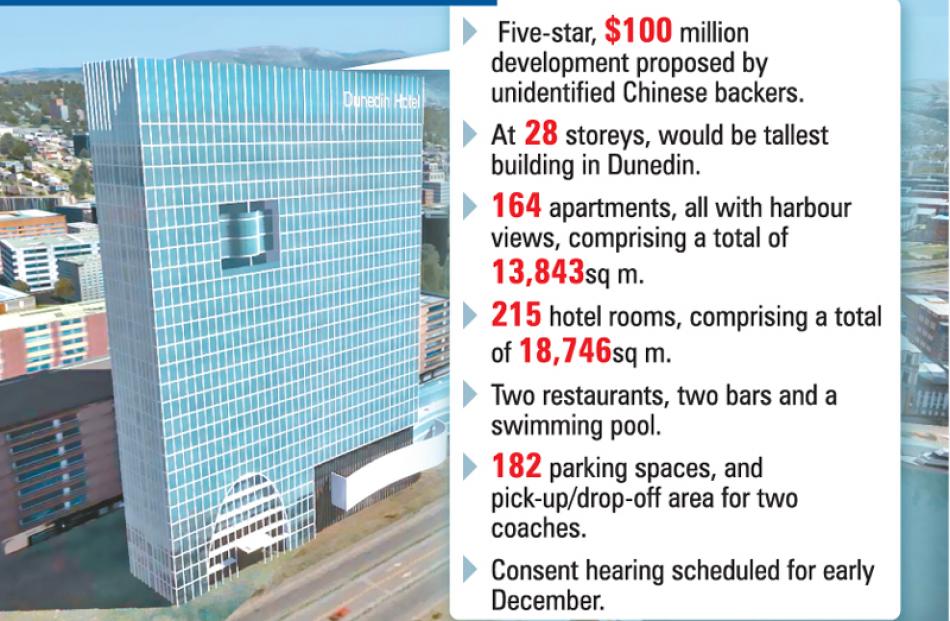 The public will be able to have their say on a proposed $100 million, 28-storey hotel on Dunedin's waterfront at a consent hearing scheduled for December.

Council staff yesterday confirmed the company behind the hotel development, Betterways Advisory Ltd, had provided additional information requested by the council in July.

That meant the company's resource consent application could be publicly notified today, beginning the public submission process, and a hearing was scheduled to begin in early December.

Betterways director Steve Rodgers, of Rodgers Law, told the Otago Daily Times he was "really pleased" with progress to date, and no major stumbling blocks had emerged that threatened to derail the project.

The council had suspended the company's consent application in July, while seeking further information on visual, shading and wind effects "resulting from the significant scale of the proposed building".

That had been expected by mid-August, but only completed in recent days, allowing the consent process to proceed to the next stage.

Mr Rodgers said yesterday the need to deal with wind issues had been the reason for the delay, but the result was only a small change to the hotel's design.

Wind could increase in velocity as it funnelled over the 28-storey building, meaning a canopy over the hotel's entrance was needed to protect guests, he said.

Plans for the five-star hotel and apartment complex were first announced by Mr Rodgers in May.

The 28-storey building at 41 Wharf St would tower over its surroundings, containing 215 hotel bedrooms, restaurants and bars, 164 self-contained apartments, and parking for buses and cars.

The proposed hotel was to be build on reclaimed industrial land, and prone to seismic activity, and was considered a non-complying activity under the council's district plan, council planner Lianne Darby said in a statement yesterday.

The council had sought, and received, detailed additional information from the developer's consultants, including an architectural design statement, shade diagrams, a wind assessment and montages showing what the completed building would look like from around the city.

The montages showed the completed hotel soaring over its surroundings from some vantage points, but still invisible from other locations, around the city.

Chinese developers were behind the project, but Mr Rodgers has so far declined to name them.

Yesterday, he said they would eventually be identified, but wanted to remain anonymous - and avoid "negative" comments - until after the consent process was completed.

Initial concern at the building's dominant appearance on the waterfront was "a storm in a teacup", and he remained confident the hotel would be granted consent.

Construction, if approved, was expected to begin next year, once detailed plans, tenders and other information was finalised, and take 18 months to two years to complete, he said.

His clients wanted to make quick progress, and their enthusiasm had not been dampened by the global economic climate.

"The world economy isn't scaring them," he said.

Public notification of the consent application meant members of the public had until October 5 to make a submission.

Further information was available from the council, including on its website. 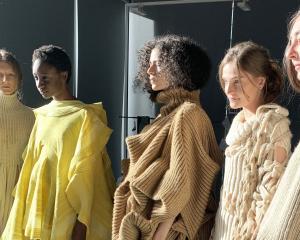