Constable cops a ribbing after police dog gets the wrong man 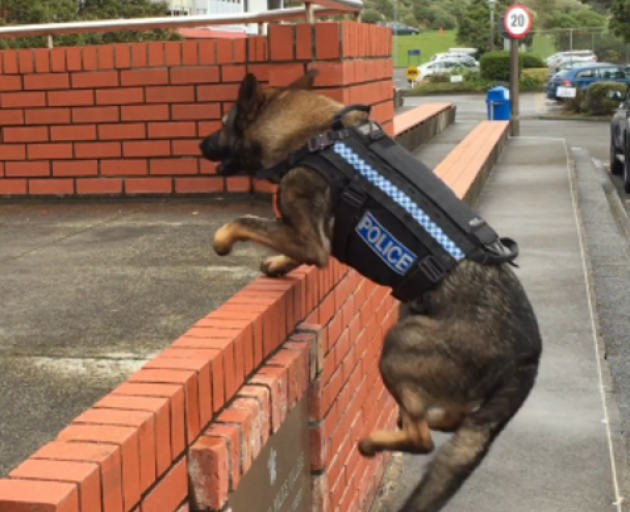 A police dog. Photo from ODT files
A police dog latched on to the leg of a man involved in a Dunedin arrest but the patrolling pooch caught the wrong man, sending one of the boys in blue to hospital.

A Mosgiel constable was treated at Dunedin Hospital's emergency department after the dog pounced on him instead of an offender during an arrest in North Dunedin on Sunday, Sergeant Kevin Davidson said.

The constable was among several police, including a police dog handler, who executed an arrest warrant at the North Dunedin property about 6.45pm on Sunday in relation to historic family violence allegations.

The occupants of the house were not willing to allow officers entry and so the dog was used to bring them out, Sgt Davidson said.

A woman came out of the house and assisted police with their inquiries, leading them to the man they were seeking.

``In the process of being handcuffed, he's run from the address,'' Sgt Davidson said.

``Unfortunately just as he left the back door, the police dog was released and at the same time another constable came from behind the hedge and tackled the offender.

``The dog has latched on to the first thing that was there and unfortunately that was [the constable's] leg.''

A 29-year-old man was arrested and charged with escaping custody, assaulting police and resisting arrest. He was facing further charges in relation to the family violence allegations, Sgt Davidson said.

The constable was taken to hospital for treatment and released the same day.

``Apart from the single dog bite to his leg, he's fine.''

The dog's handler ordered the animal to release the officer almost as soon as the mistake was made.

The constable received a ribbing from his workmates, Sgt Davidson said.

``He's getting a bit of stick and there's a few emails going back and forth - just the way it should be.''

He was expected to return to work shortly.

``It's not the first time it's happened and I dare say it won't be the last,'' Sgt Davidson said.