Consultant not a fan of groynes 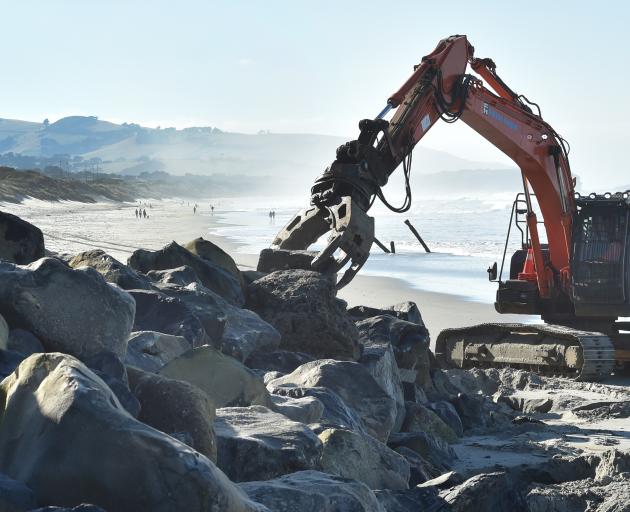 Such structures could be effective when sediment moved primarily along the shore, but those were not the conditions driving erosion at the St Clair to St Kilda beaches, eCoast oceanographer Ed Atkin said.

Erosion there was largely because of sand moving directly offshore during storms and it was not sustainable to consider a groyne as a long-term solution for episodic erosion, he said.

The Dunedin City Council is developing a plan for management of the coast from St Clair to St Kilda and eCoast submitted reports about sediment movement patterns off the Otago coast to help council staff and the public formulate a holistic approach.

The consultant, commissioned by the council, discussed various techniques such as reshaping dunes, building breakwaters, bringing in sand and creating groynes.

A groyne, on its own, ‘‘does little in retaining material on this beach’’, Mr Atkin said.

Cr Radich has called for the old groyne at St Clair to be repaired, arguing the approach was demonstrably effective at building up the beach during the 20th century.

Mr Atkin said his firm did not want to get into a war of words with Cr Radich and decisions should be based on scientific fact and physical principles.

‘‘There is little, if any, evidence that the old groyne had a positive impact on sediment transport and sand retention at St Clair,’’ he said.

Cr Radich pointed to historical photographs, Ocean Beach Domain Board reports and the findings of a series of engineers, including Charles Turner, who concluded in 1955 groynes had been well proved in the previous 50 years.

‘‘Groynes were built each time to mitigate the scouring effects of the Esplanade sea wall and each time they were successful,’’ he said.

‘‘It is only through lack of maintenance that their effectiveness diminished.’’

The consultant concluded the broad sediment transport system in Otago was currently in deficit.

Hopefully this is a different consultant to the ones that designed and engineered foot access to st Clair beach only to have the sea destroy these engineered stairways. That cost the ratepayer two lots of multiple hundreds of thousands and council never sought thier money back. Silly consultants are like gypsy fortunetellers reading tea-leaves or entrails

Sometimes one solution is not enough. However history tells us the single groyne did indeed do a very good job. I do agree with Mr Atkin in that there may indeed be a link between lack of sediment transition potentially caused by the Roxburgh dam.
It was completed right at about the time of the 1955 St Clair photo. Since that time, as Cr Radich has pointed out, the lack of maintainence for the single groyne would to have had an effect also. It could well be these two conditions are indeed linked and have contributed to the scouring of sediment at St Clair.
It seems to me three things are required, firstly, reduce the wave impact, secondly, trap and accumulate sediments. thirdly, somehow release sediments from the dam.
Akmons placed in front of the wall would diffuse wave energy reducing impact and scouring, combined with up to three groynes placed strategically along the beach. Surely something like this in the right combination and scale would work?
Globally, there are literally thousands of examples of amazingly sucessful Akmons and Groynes in action. Please DCC, can we not try and reinvent the wheel? While we all argue about the best solution.....nothing gets done.

Pinkney is correct about the inept engineering of the St Clair sea wall. A child could have done better. So, is this consultant any better? If he is ignoring the past success, then probably not. It wouldn't cost much to at least reinstall them and see what happens. Can't be much worse than the mess so far.